Matt Clarke looks at the fruits of Fluval's development programme to create their new range of filters with this exclusive world first review.

After three years and spending £2 million in development costs, Hagen have announced their new Fluval G range of external filters.

Undeniably the most talked-about aquarium product launch of 2009, Hagen reckon the G3 and G6  are so sleek and sexy that customers won’t be able to resist showing them off. They are even planning to produce special display cabinets for them.

Like any other external filter, the Fluval G range is designed to sit beneath the tank. Each model has a motor unit mounted in the lid, several capacious removable media baskets for biological media and, uniquely, removable fast-access cartridges for both mechanical and chemical filter media.

They also incorporate monitors with LCD displays which record current and historical data on flow rate, temperature and conductivity, and allows alarms to be set when values fall outside a set range.

Their squat, square footprint means that they can be installed easily in most cabinets and they are very easy to set up. Insert the red gasket into the groove in the rim of the filter, rinse the biological media and fill the baskets in the main body of the filter.

Put the mechanical and chemical filter media cartridges into the filter, lock down the lid using the metal handles and place beneath the tank.

The filters are supplied with new silver-look hoses which match the filter design and don’t show unsightly bacterial or algal deposits.

These are quite firm so should not kink easily and the re-designed hose connectors make connecting/ disconnecting straightforward. More versatile inlet and outlet connectors are also supplied. 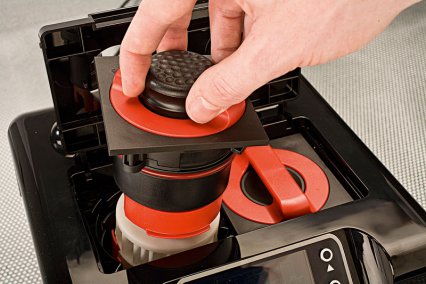 To get the filter started (or primed) initially fill the canister with water by getting it to syphon out of the tank and into the filter. A simple push-button priming mechanism handles this job and after rapidly pushing the button up and down for a short while you should eventually hear the filter fill up. It can then be switched on.

The integrated Hydrotech Performance Monitor provides several useful features and we found it easy to use, even without reading the instructions.

The displays give readings for temperature and conductivity (EC), as well as a visual indication of the flow rate and a count of when the mechanical, chemical and biological media needs to be cleaned.

A desired maximum and minimum level for temperature and conductivity can be programmed and the unit will alert the owner if levels move outside the set range.

It also provides alerts for when air is detected in the filter, when the impeller has jammed, when the temperature or conductivity are out of range and when the flow rate has become dangerously low.

Unlike any other filter on the market, the Fluval-G’s Hydrotech Performance Monitor incorporates a conductivity meter with titanium probe.

Hagen claim this requires no cleaning or calibration and that it automatically senses whether the water is fresh or saltwater and changes the reading accordingly.

It takes 48 hours for this to calibrate itself properly, but it’s also clever enough to change the output reading depending on the water in your tank, so it will display salinity for marine systems and conductivity for freshwater.

Hagen reckon you can use this not only for indicating whether your water is suitable for certain types of fish, but also to help you identify if there is any deterioration in its quality.

As water evaporates or maintenance slows, conductivity can rise and this can be an early warning that remedial action is required to restore the balance.

Probably the most useful aspect of the Hydrotech Performance Monitor is the flow rate indicator which allows you to clearly see if the filter is running at full whack. If it isn’t, you simply clean the media and it should quickly return to optimum performance. 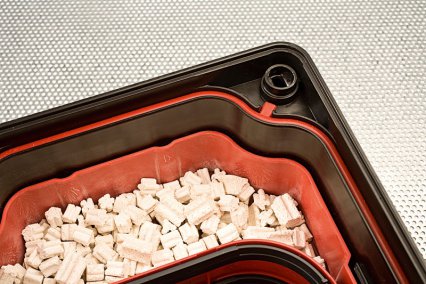 Changing mechanical and chemical media couldn’t be easier and can be done with the unit on — but it recommends turning off first.

The flow to the cartridges is shut off by lifting the metal Aquastop lever on the top of the canister. They can then be unlocked and removed for cleaning or replacement. A stiff brush, which is provided, cleans the mechanical media cartridge and the chemical media cartridge can even be filled with media of your choice.

The cleaned or replaced cartridge can then be re-inserted, locked back in place, lever lowered and filter re-started. There’s no need to re-prime the filter and the air trapped inside is released after a few minutes of gurgling.

We managed to remove, wash and replace the media cartridge in about three minutes. There’s no external filter on the market with such easy access to the filter media and we think this is the Fluval G’s killer feature.

Since you should not need to take apart the entire filter to clean the biological media, you can safely leave your bacterial population undisturbed. This is also one of the few filters on the market with which it would be fine to clean the mechanical media thoroughly under the tap - providing it’s done on a regular basis.

Bear in mind that this technology doesn’t come cheap. Hagen hope to sell the Fluval G3 for £299.99 and G6 for £349.99, making them among the most expensive on the market.

This is a really outstanding product, but there are a few features and functions we’d have preferred to see done differently.

Overall, the filters feel quite robust and of good quality. However, the shiny plastic outer skin surrounding the canister flexes very slightly in places, marks show up and it’s fairly easy to scratch, so may not look pristine for long.

Although priming is straightforward and worked well, it takes quite a few vigorous pushes to encourage the water to flow into the filter. It would also be useful if the inlet and outlet pipes were labelled with an arrow as we initially inadvertently connected the pipes the wrong way round.

The pipes are also opaque, so it’s hard to see when they need cleaning, although the flow rate monitor may indicate an issue. The attachments that connect the hoses to the tank are greatly improved, but may not work on every tank.

The Hydrotech Performance Monitor is very handy, particularly for monitoring flow rate. However, the display is not permanently illuminated and you have to press a button to read the figures. A constantly-lit panel might be more user friendly.

The filters have an alert system to indicate when the temperature, conductivity or flow rate fall outside their set range. However, this consists only of a flashing display, not anaudible alarm as you might expect. If the filter is hidden in your cabinet, you’ll miss this warning.

Disappointingly, there’s no heater built in and for these prices we’d like one included. However, we did find a socket on the back, which Hagen confirmed is for a special G-series heater that can be linked to the Fluval-G. They are due to launch this add-on at a later date. 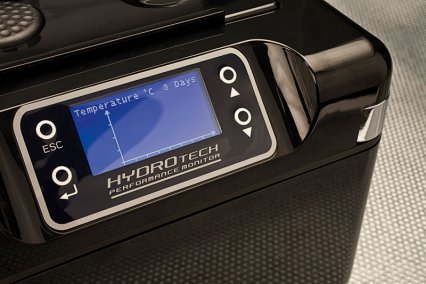 We have our doubts about the importance of including the conductivity meter. Hagen say it is important to measure conductivity and that it can be used to predict when the fishkeeper needs to conduct a water change. It can also provide some useful information on water suitability for your fish.

However, while this may be true, few people in the UK use conductivity, few again are aware of desired conductivity ranges for specific fish groups and the uses of the conductivity meter for predicting when to change water are poorly understood by most fishkeepers.

We spoke to one retailer highly experienced in aquarium equipment who admitted to knowing little about conductivity. Indeed, he said that in 20 years of trading he’d never been asked for either a meter or received a question on the subject. If the importance of the conductivity meter goes over the head of an experienced retailer, is the average person going to get it?

At the time of writing — before the Fluval G has officially gone on sale — there is little information on conductivity in either the supplied literature or on Hagen’s website. There’s due to be a DVD supplied with the filters, so perhaps this complex issue will be addressed there.

Ultimately, we feel that the conductivity meter is an expensive addition that’s going to be largely ignored by the bulk of users.

One really positive aspect is that the flow rates, which many initially believed too low, are actually not bad at all.

At the product launch Hagen chose to quote flow rates in a different way to their other models and those of their competitors. That led many to believe that the flow rates of these filters were too low. Hagen have since confirmed that this is not the case and instead have adopted a different form of measure which quotes the filter flow rate.

Of course, this is all splitting very fine hairs. The Fluval G is a splendid product and probably the easiest external filter on the market in terms of maintenance.

When most other manufacturers are feeling the global economic downturn Hagen are brave enough to spend massive amounts on developing such an innovative piece of kit. The end result is superb and, unusually for aquarium equipment, looks very desirable.

The Fluval G is a well-designed and stylish product that incorporates some innovative features and is also incredibly easy to maintain. The flow meter and the ease of access to media are exceptional. The filters worked very well on our test aquariums and were very, very easy to maintain.

However, ground-breaking innovation and design comes with a high price tag.

To us, the conductivity meter wasn’t a huge draw and we would prefer to see an integrated heater and the automatic priming mechanism of the FX5 instead. However, the quick-change media cartridges really are worth spending the extra cash on and there really is no other external filter on the market that is so easy to keep clean.

Minor criticisms aside, it’s still a brilliant filter and if you’ve got the money for one you’re unlikely to be disappointed. 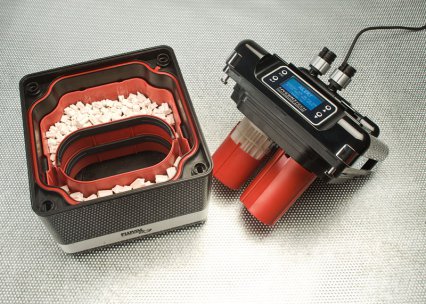 This review was first published in the Christmas 2009 issue of Practical Fishkeeping magazine. It may not be reproduced without written permission.