Looking for great spreading greenery for your planted tank? Graeme Edwards introduces some of the top contenders.

This aquatic moss originates from the USA but many related species even reach Australia.

It can often be found in slow or even stagnant water and its tight cushion-like clusters can also be seen emersed, due to fluctuations in water levels.

This moss will attach itself to the usual locations — wood, rocks and hardened riverbank soil — during the dry seasons.

If receiving this moss by post, you could be disappointed at its transported state. It’s dark green, limp and uninspiring — but the true pleasure is yet to come.

Attaching this delicate moss to any hardscape surface can be fiddly. Spread it thinly but evenly, not laying too thickly but avoid creating too many gaps. Best tie it in place with dark cotton.

Fissidens looks particularly natural when tied to branch-like pieces of wood or nestled at the base of a rock formation.

It’s very slow growing and requires little, if any, pruning. Over the months the plant’s rhizoids will attach to the hardscape and bloom into a delightful, round mint-green cluster of feathery stems.

Care is relatively easy. It does not require CO2 although, like all plants, this would be very welcome.

In my experience this plant reacts badly to liquid carbon-type products in high concentrations, as when combating algae. 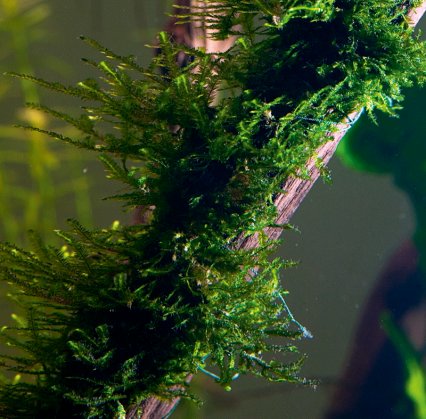 Probably the most commonly available moss, Taxiphyllum barbieri, or Java moss, is versatile and undemanding. Originating from South-East Asia, it is part of a huge line of terrestrial mosses, but few can adapt to underwater life.

This plant can be either one of grace or disarray. Left to its own devices, after being attached to hardscape, it will soon resemble a tangle of long, thin, intertwining spiders’ webs.

However, if pruned, it can be shaped into attractive clusters, following the lines of wood or shaped to follow the contours of a rock. As it also has a moderate growth rate, it can be used to great effect as a carpeting plant in lowlight aquaria.

The key is not to lay it too thickly when fixing to hardscape as you need to see the wood or rock through it. Failure can result in rotting under layers and trigger localised ammonia spikes. If you only seem to have algae in your moss, this could be the reason why.

Don’t be shy when pruning Java moss as the more severe you cut it back the tighter it will grow.

T. barbieri, being undemanding, will grow almost anywhere and in almost any water conditions.

Not fussy about light requirements, this is a very versatile plant and growth is slow to moderate. In low light and lean water columns it may look smaller and thinner. In higher tech aquariums with high fertiliser levels this is unstoppable. 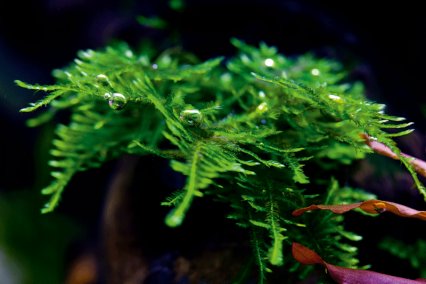 Every day is Christmas with this stunning moss. Originally from Brazil, it was first seen in the Japanese hobby and known as Amazonian willow moss, thanks to close association with other Vesicularia species more common in the Far East. Now it has finally reached the European hobbyist.

The name for this moss is very indicative of growth style. Vesicularia montagnei ‘Christmas’ (sometimes considered a form of dubyana) is one of the most sought-after mosses, forming dense, bright green, irregular pinnate growth that simply yells ‘look at me’.

Its creeping, tight-forming nature hugs rocks and wood like no other. Given its growth habits Christmas moss is best positioned either over rocks or in crevices to sprawl around the aquarium. Avoid tying it to branchy wood as it can look out of place, which does not fit into the natural style of aquascaping.

Strong light, with regular pruning, keeps it looking compact and interesting. However, without attachment to hardscape you will have a survivor growing loose, better resembling Java moss, its close relative.

More demanding than the rest of the mosses, it is specialist and best kept where higher light levels, along with CO2 and liquid fertilisation, are part of the aquascaper’s set-up. 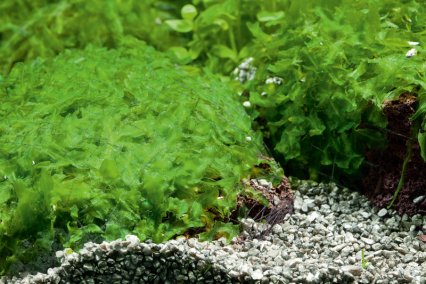 This odd yet intriguing plant originates in the Far East, being found in countries such as India, China, Japan and Hawaii.

It’s found where there’s high concentrations of nitrogen, usually in human locations, giving the plant access to excess agricultural fertilisers. Interestingly, it has yet to be found growing underwater in the wild.

Previously known as ‘Pellia’ this is not a moss but a liverwort, much like Riccia fluitans and more closely like Riccardia graffei. However, it is much larger and is heavier than water, so a sinker.

Liverworts do not have leaves but a thallus. This means it does not have organised parts such as roots, stems or leaves. It propagates by division of the thalli, which gives it the distinctive staghorn shapes.

Monosolenium is not taken on board by more advanced aquascapers as it can be tricky to find the right cohabitants to match or complement its distinct, almost alien appearance. It should either be attached to wood or stone, much like the other plants featured here, taking care not to break it up to much.

Another option is to nestle or tuck it in at the base of plants, or in small crevices for it to naturally take hold.

Choice of tank inhabitant is crucial. Due to Monosolenium’s brittle nature, particularly gregarious fish should not be considered companions.

Undemanding, it will grow in high to low light conditions. When given optimal growing conditions and CO2, small bubbles of oxygen can be seen on the undersides of the plant’s thallus. It’s great for the beginner aquascaper and a challenge for the artist. 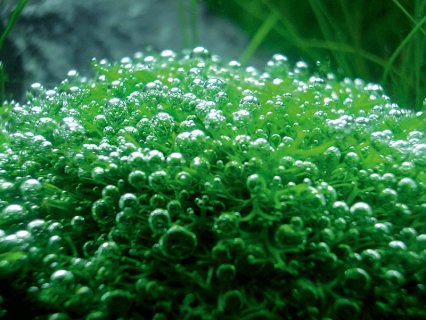 Commonly called Crystalwort, Riccia fluitans is one of the few plants that truly stand out. It was made famous by some of the stunning ways Takashi Amano presented it in his life-changing aquascapes.

There are more than 180 species of Riccia, many if them non aquatic. However R. fluitans is a fully aquatic form, often seen floating in slack waters of a river or lodged in some crevices where there’s rocks and wood.

R. fluitans grows much like Monoselenium tenerum, where bright, iridescent thalli divide and expand, branching as it goes. There’s often a darker form, looking dull with edging on almost transparent.

This form grows almost like another species but starts life as the R. fluitans you originally bought. This growth form is less attractive and sinks to the bottom, making it hard to remove completely.

R. fluitans is perfect for quick impact — brilliant if you want to create a foreground carpet in just a matter of weeks.

Even though Riccia’s natural tendency is to float, it can be tied to wood or stones by fishing line or hair net. It will not attach to hardscape, so once the plant’s buoyancy outweighs its restraint, it will tear itself free. This is why Riccia is a high maintenance plant, often needing to be re-tied every few weeks.

If you wish to grow it, by far the easiest way is to float it. Taking advantage of high levels of CO2 in the air and being close to bright light —even if it’s one T8 tube — Riccia will grow well.

If wanting to grow R. fluitans submersed and see it pearl and glisten like diamonds, then CO2 should be injected with a high level of light. Failure to do so will result in a weak, brittle and pale plant.