No freshwater aquarist’s career would be complete without keeping some of the great corys. One of them, Corydoras sterbai, made its first appearance here in the early 1990s. Jaws dropped, maidens fainted, and wallets were emptied on its arrival.

Unlike most others available at the time, C. sterbai was quite colourful. Garish orange fins complemented an unusual black and white polka dot pattern. Understandably, this tank-catfish —as the Germans like to call them — immediately became a must-have purchase.

Most, if not all of those first seen were wild caught and Sterba’s cory comes from the Rio Guaporé in western Brazil, a remote area still poorly known with respect to its fish. This waterway unites with the Mamoré to form the Rio Madeira, one of the main southern tributaries of the Amazon.

The Guaporé flows over ancient rock formations of the Brazilian Shield, so its water remains soft and clear over much of its course. Decomposing leaves and other organic material stain it a rich reddish-brown to produce a typical blackwater stream.

In contrast to its eastern twin, the Rio Mamoré drains young sandstones that more easily erode and become suspended. So these two similarly sized rivers have different chemical characteristics.

Although the Brazil-Bolivia border is home to several hundred fish species, the Guaporé is species poor compared to nearby streams. The river is believed to represent the western limit of a fish fauna centred on streams of the Brazilian Shield. This region includes the Tocantins, Tapajos and Xingu, where most L-number suckermouths come from.

The Guaporé-Mamoré system flows through the Brazilian states of Rondônia and Mato Grosso where agriculture and logging have taken their toll on the landscape. Although this region is off the beaten track, the good looks of C. sterbai have motivated aquarium fish adventurers to search for ever more beautiful species there.

As a name, C. sterbai is almost 50 years old. In 1962 Joachim Knaack recognised the distinction and uniqueness of what was then an undescribed species. He named it after Dr. Günther Sterba, a German cell biologist who studied lampreys and African clawed frogs.

Dr. Sterba was also an avid aquarist and, despite difficulties encountered as a German biologist working behind the Iron Curtain after World War Two, published some classic aquarium books since translated into English and Czech. He also served as vice president of the Federation of British Aquatic Societies (FBAS). 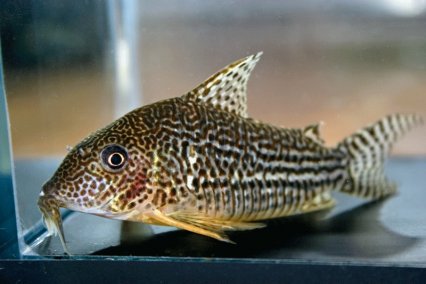 In the same paper, Knaack also described C. haraldschultzi (above, picture by Chris Ralph) named in honour of a Brazilian anthropologist, film maker and supporter of Amerindian culture.

Schultz’s cory was also from the upper Guaporé and had the same orange-coloured paired fins as C. sterbai, but had a longer snout and head pattern composed of black dots and short wavy lines on a pale base colour.

Downstream of the confluence between the Guaporé and Mamoré lies the old railway town of Guajará-Mirim which serves as a main economic centre of the upper Rio Madeira.

This area was made famous by Dr. Michael Goulding, an American who studied the Amazon’s fishes and fishermen and documented the migrations of characins and catfishes from the Amazon delta to the upper Rio Madeira. These have fed countless generations of amerindians and Brazilians, but commercial fishing has wrought havoc on stocks. 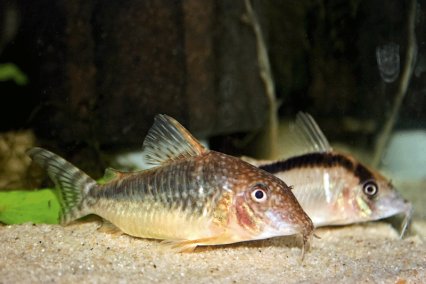 Ten years after Knaack’s paper, Han Nijssen described C. gossei from around Guajará-Mirim and, 15 years ago, J Dinkelmeyer described C. pinheroi and then C. seussi (above, picture by Chris Ralph) from the same area. 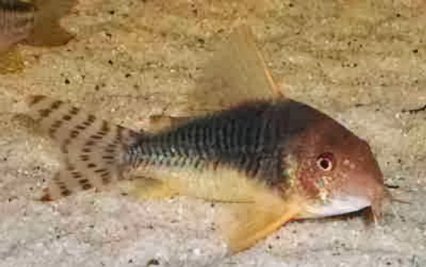 These three species all have the same orange pectoral and pelvic fins as seen in C. sterbai and

While C. sterbai and C. haraldschultzi are described from the blackwater Rio Guaporé, the other three are from the lower Mamoré. Because the upper Mamoré has lots of suspended sediments, blackwater from the Guaporé means that C. gossei,

C. pinheroi and C. seussi might enjoy water with a slightly higher conductivity and cooler temperature than the other two.

Within this quintet are two pairs of species with the same coloration, but different head shapes. This is a common phenomenon among Corydoras where two or more species found in the same area have the same pattern, but one has a long snout and the other a short one.

In these mimetic species pairs the short-snouted corys are typically easy to breed, even prolific, but the long-snouted species are rarely, if ever, spawned in captivity. Those we know about spawn infrequently and hide a single clutch of eggs under a leaf or in a small cavity.

In line with this, the long-snouted of the complex (C. haraldschultzi, C. pinheroi and C. seussi) have rarely been spawned in aquaria. However, the short-snouted C. sterbai and C. gossei are easily encouraged and regularly produce up to several hundred eggs.

The mystery of mime

Mimetic corys are now being studied by Dr. Markos Alexandrou and Dr. Martin Taylor at the University of Bangor who have worked out how corys are related.

Early results of their research suggest that the long- and short-snouted ones fall into different groups. This means that for the pairs of mimetic species the short and long-snouted corys have each evolved the same pattern quite independently rather than inheriting it from any common ancestor in a family tree.

It’s not easy to explain why some corys share a pattern, but most biologists specialising in this field often invoke some kind of relationship between a model and a mimic.

The idea goes that the model is doing something that gives it a competitive advantage — for example, being distasteful or poisonous. Typically, the model will have some characteristic that predators visually cue in on and the mimic evolves something like it to take advantage.

However, this explanation doesn’t fit very well among corys. In the upper Rio Negro, Dr. Sands found C. adolfoi and C. imitator in different habitats and to be active at different times of day.

As such, it’s unlikely that they school together very often and any association is quite incidental.

Another explanation is that each pattern is matched to a particular habitat largely determined by local geology, relief and vegetation.

While such as C. adolfoi and C. imitator may enjoy virtual invisibility in the blackwater sandy bays of the Rio Negro, they would be sitting ducks on a leaf pack in the Rio Mamoré. 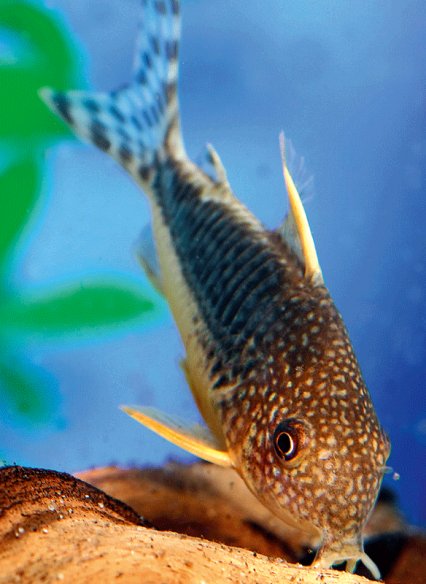 What about their prices?

Expect to pay £5-10 for C. sterbai or C. haraldschultzi, and at least double that for the other three.

The five are among the most colourful of corys and do not require any special treatment.

However, given that they can handle higher temperatures, they are good tank mates for Discus and well suited to warm water systems in which most other corys would struggle.

Ornamental fish producers in the Far East have been culturing and exporting C. sterbai over the past few years. Given their popularity and relaxed attitude to sex they are popular fish.

As a result, albino and long-finned strains are also available and it’s likely that those in your local retailer’s shop are as farm bred as the fancy guppies they share the tank with.

How can I breed them?

A male-biased group of six or more can be brought into condition with plenty of frozen and high quality dry foods.

Water chemistry is not critical, but it should be very clean and these species are known to tolerate, even enjoy, warmer temperatures than many other Corydoras. Soft (10-100mS; 0-4 GH), acid-neutral (6-7 pH) and warm (24-28°C/75-82°F) water kept clean with a mature biological filter is ideal.

Water changes of 30-50% weekly using either collected rainwater or dechlorinated tapwater will keep them in excellent health and encourage a spawning. Once you’ve got them started, C. sterbai and C. gossei spawn every few weeks.

I’ve found C. sterbai avid egg eaters, so always carefully remove the eggs to a breeding net. There they will remain safe and can be fed newly-hatched brineshrimp and microworm for a few weeks before being released into the spawning aquarium or transferred to a larger tank.