There are some 100 species or sub-species of the Uca genus, but  determining them is often difficult as specific features described in scientific literature are often useless without comparative preserved material of other species.

These fiddler crabs — on sale as Uca sp. 'Haribo' — are an import from Indonesia. It is claimed to be a single variable species and might belong to Uca crassipes, a species with a fairly wide distribution in the Indo-West Pacific, but as long as this is uncertain it seems wise to use only a popular name - it may actually be a collection of species.

There are two explantions for the general name of fiddler crab. Both refer to the feature among males which have one enlarged claw.

Some say they are called fiddlers because their large claw looks like a fiddle. Others believe the 'waving' of the claw resembles the movement of a bow over fiddle strings. This latter explanation seems more substantial. 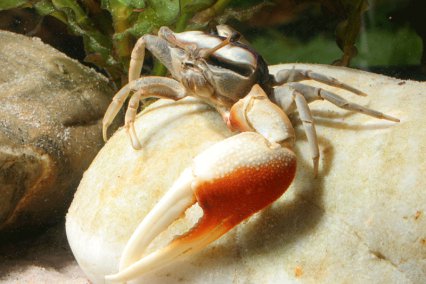 The enlarged claw can be on either side, differing individually and is not species specific. Rarely, and mostly in bred specimens, both claws are enlarged. Such claws are used by the males to perform courtship and for ritualised fights.

The second, normal, claw picks up food, while both claws on females are normally developed. All fiddlers, however, prefer to pick relatively small food particles.

In nature, they can be found in a wide variety of habitats. Many live on sandy beaches, some in muddy mangroves, others on rocky shores.

Three or four species can often be found living syntopically. Although this clearly shows that the different species inhabit different micro-habitats and obviously have different food preferences, all can be fed in captivity with artificial fish food tablets. These fall in pieces when in contact with water and are readly taken by the fiddlers. Many other types of food are also taken.

These crabs can refuse all food, usually due to transportation damages and/or diseases.

Dead leaves of oak or beech should always be in a fiddler crab tank. These creatures feed on them and on detritus from the leaves. Avoid pellets produced for food fish, however, as their high protein content could lead to fatal nitrite levels in the water.

All fiddler crabs are more or less euryhaline because they have an amphibic way of live. During high tide they hide, flooded in self-burrowed holes, and leave them during the ebb to feed and mate. They do virtually everything on land.

During heavy rains they can find themselves in pure fresh water. When a big wave breaks they can be washed into saltwater again. However, keep them in aqua-terraria with strong brackish or pure marine water. 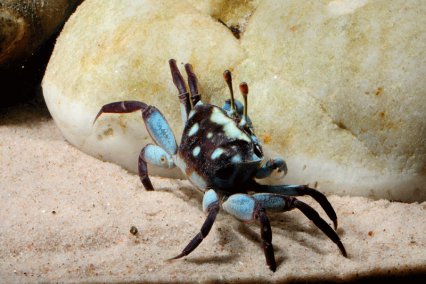 A tank for fiddlers, like the Haribo, need not to be big. This species (or these, if actually several) stays relatively small, the carapace width hardly reaching 3-4cm/1.2-1.6“. For three or four males and an equal number of females a tank of 60 x 30 x 30cm/24 x 12 x 12“ is big enough, but larger tanks are easier to keep stable in respect to water quality.

It is not necessary to imitate the tides. The fiddler tank should have a large land mass of fine sand and a smaller section of water at an area ratio of 2:1. The water level should not be higher than 5cm/2“.

The beach should be stabilised with stones or glass, otherwise the sand will slip in the water. Install good aeration in the water section too,  preferably using an air tube. The sand will work like a big bio-filter if there’s strong enough water movement through the air bubbles. If there’s insufficient movement the sand will become foul and smelly.

Such a situation is dangerous. Evaporation is relatively high in these tanks, so control salt content regularly. Mark the water level on the glass. When water has to be filled up only use pure fresh water as the salt does not evaporate! There is no danger to crabs if salt content fluctuates slightly, as they are used to it in nature.

In such a small tank Haribos should be kept alone. However, if you have a larger tank, some interesting species are available and suitable and have similar needs. These include the Zebra snail (Neritina turrita), the brackish water Hermit (Clibanarius africanus) and dwarf mudskipper (Periophthalmus novemradiatus). You can also cultivate small mangrove seedlings in larger tanks.

It is possible to breed fiddler crabs in captivity, but there are no reports about success with Haribos yet as the first imports appeared only in January this year.

All fiddler crabs reproduce in a similar way. Females carry the eggs under their abdomen. When they are ripe the female enters the water where all larvae hatch immediately. These are called zoea and resemble water fleas. They are free swimmers and eat rotifers and freshly hatched brineshrimp nauplii.

After three or four moultings into other states of zoea they moult into the final larva state called megalopa and these look like a crayfish. They are still free swimming but tend to settle and, after a final moult, the young look like the adults and start the typical way of life of fiddler crabs. Rearing larvae is only possible in marine water.

For other crabs, see the following:

This item first appeared in the June 2009 issue of Practical Fishkeeping. It may not be reproduced without written permission.