Dottybacks for the reef aquarium Dottybacks may be fierce jewels of the reef, but they draw nothing but admiration from Phil Hunt.

The Pseudochromidae are a family of popular and very colourful fish that need some consensus as to a common name. You will find them sold as basslets, which is a broad term also encompassing related families, and dottybacks, which is precise but hasn’t become common in the UK.

Worst of all, they are known as grammas — and that’s misleading. Some look like grammas but do not belong to the same family.

Most dottybacks frequently offered for sale are small, brightly coloured fish, many of which make excellent reef aquarium inhabitants. We’ll focus on these species, as they can bought fairly easily — but also look at some rarities.

Most dottybacks are robust in the aquarium, in some cases highly territorial. While all are safe with sessile invertebrates, and smaller species will generally leave hermits and snails alone, keeping shrimps with some can be tricky. Some species, notably the Strawberry dottyback (Pictichromis porphyreus), the False gramma (P. paccagnellae) and the Diadem dottyback (P. diadema) will often attack and kill cleaner shrimps — apparently with no interest in eating them.

This can get quite extreme. A friend once kept a 5cm/2” Strawberry in a 180 x 60 x 60cm/71 x 24 x 24” tank and the only shrimp he could keep with it was a Boxing shrimp (Stenopus hispidus) large enough to eat the dottyback for breakfast, had it been so inclined. It was clearly well enough armoured, so the fish was no threat.

Mixing dottybacks with other fish also requires care. Even small ones are feisty and territorial and should not, with few exceptions, be kept with shy or jittery species. Tank mates should be robust fish of similar size or larger, and not the same colour as the dottyback.

Only a few dottyback species can be kept with others of their own kind in normal-sized tanks, although these will often pair up and sometimes spawn in the aquarium.

Curiously, despite their boldness, some dottybacks may disappear for several days in a densely-stocked reef tank — which is the preferred environment of most species. This is probably not because they are shy, but rather pursuing the same kind of lifestyle they have in the wild — among complex spaces within the reef and hunting small prey.

Among those species where more than one individual can be kept in the aquarium (Pseudochromis fridmani is a prime example), males may disappear for weeks because they are guarding egg masses laid in a crevice somewhere in the rockwork.

Dottybacks will eat most live, frozen and dry foods, and supplement the rations provided by hunting small invertebrates. Some species (again P. fridmani is a good example) are avid hunters of bristleworms, sometimes tackling worms longer than themselves. It’s common to see dottybacks with worm bristles embedded around the jaws. These don’t seem to trouble them, as presumably they have evolved to tackle spiky prey.

A certain amount of care is needed with diet. Some, particularly Pictichromis, can suffer from fading colours in the aquarium, and good diet, including quality flake food and spirulina-enriched brineshrimp can help to prevent this.

Both types were until recently included in Pseudochromis but then some stockier species were moved into the separate genus of Pictichromis, although the heavy-set Sunrise dottyback remains Pseudochromis rather than Pictichromis flavivertex. 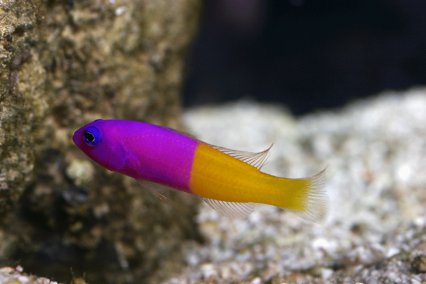 The False gramma is a beautiful species, dazzling even among this family. The front half of the body is vivid magenta-purple, the rear bright yellow. Growing to a maximum size of 7cm/2.8”, it would seem an ideal species for the smaller aquarium, but there is a slight matter of temperament.

Size for size this is one of the most territorial marine fish around and its tank mates need to be chosen with care. It should be kept with tough, larger species as it can cause chaos in a tank stocked with the usual mild-mannered small reef tank favourites. It also tends to attack shrimps, although it is less problematic than P. porphyreus in this respect. As a sole pet in a nano reef system, or with those larger companions, it makes a stunning inhabitant.

It’s worth knowing how to tell the False gramma from the Royal gramma, (Gramma loreto). Side by side, you would never mistake these fish for each other, but you might in isolation. It’s an important identification to be able to make, as the Royal is a much more peaceable species than the False.

There is one very easy difference: where the two colours meet on the flanks of the fish there is a well-defined boundary between purple and yellow in the False gramma, whereas the Royal gramma has a less sharp transition from one colour to the next, with a scattering of yellow scales extending into the purple area and vice versa.

There are other differences. The Royal gramma has a black spot at the front of the dorsal fin and a dark diagonal bar through the eye — both of which are absent in the False gramma. 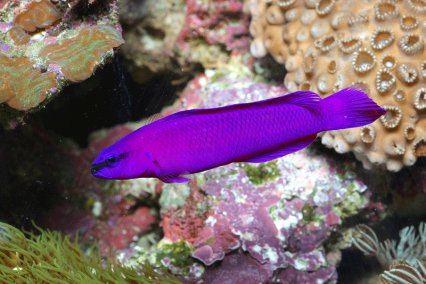 One of the best of all marine aquarium fish, this grows to 7cm/2.8” and one of the most peaceful dottybacks. It can be kept in pairs or groups in larger tanks, although setting up such groups is expensive. As a Red Sea species, this is not a cheap fish.

It is a dazzling magenta-purple, with each scale outlined in a darker hue and a darker band through the eye — and looks astonishing under actinic lights, almost glowing. The tail fin is long and flowing, and the fins are solidly coloured.

This species is sometimes available as captive-bred, but such fish are just as expensive as wild counterparts which are just as hardy as the tank-bred fish.

It’s important not to confuse this with the Strawberry dottyback, which is a similar colour but is much stockier with fins either clear or clear at the edges.

These are not solidly coloured like those in P. fridmani, there’s no dark band through the eye and it is much more territorial than P. fridmani.

This is a similar shape to P. fridmani, but less brilliantly coloured, with black longitudinal stripes on a white background. It is more peaceful than P. fridmani and can be kept in groups.

It has been bred in captivity, but in the UK most are wild-caught. It comes from the Red Sea, Gulf of Aden and Western Indian Ocean, growing to 7cm/2.8”.

One of the smallest of the family, this is great for the nano reef aquarium. It is beautiful, another of the slender species, velvety black with neon blue stripes on the head. Another fish from the Red Sea and Western Indian Ocean, it grows to a maximum 5cm/2” and is peaceful. It has been bred in captivity. 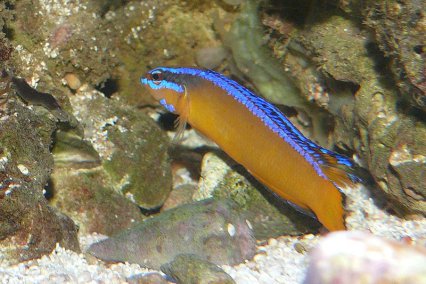 Rather less common in the aquarium, this is another of the long and slender types of dottyback. It does not share the peaceful temperament of similarly-shaped species, being a fiercely territorial fish. It grows to a maximum size of 10cm/4”.

Found in the Red Sea and Western Indian Ocean, its range overlaps with the similar P. dutoiti. This is a fish to keep with larger, robust companions and it has been bred in captivity. 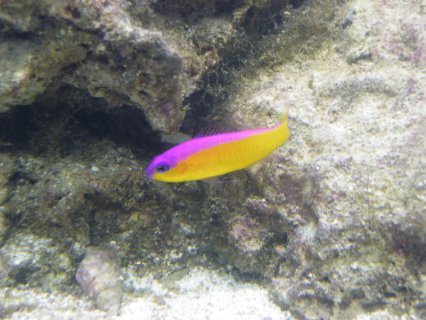 This has the same dazzling colours as the False gramma, but arranged differently This has the magenta on its back, the bright yellow on the belly. It has a similar maximum size of 6cm/2.4” and is from the Western Central Pacific Ocean.

It is easier to enjoy than the False gramma as although still territorial is nowhere near as aggressive. 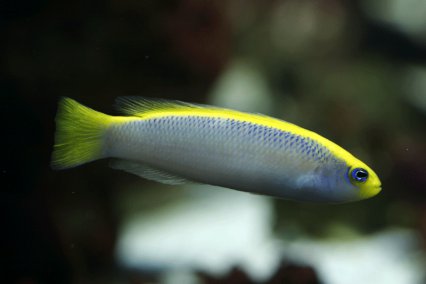 The Sunrise is unmistakable, with a deep blue body and a broad yellow band along the back. It grows to 7cm/2.8” and comes from the Red Sea and Western Indian Ocean.

It is more solid than most Pseudochromis, but is usually peaceful, sometimes even shy when kept with larger or more boisterous tank mates. It has been bred in captivity.

Another little terror, the Strawberry grows to a maximum 6cm/2.4” — although it’s not usually as territorial as the False gramma. However, it is often more likely to attack shrimps than P. paccagnellae.

It is solidly coloured in approximately the same shade of bright magenta-purple as P. paccagnellae and P. diadema. It comes from the Western Pacific Ocean, from the Philippines to Samoa, and is superficially similar to Pseudochromis fridmani — occasionally being sold as such.

They are very different in temperament — P. fridmani being a much better species for most tanks, albeit a more expensive one.

Out of the ordinary species include the beautiful, if territorial, 8cm/3” Crimson Cypho purpurescens, the similarly-sized Splendid dottyback Manonichthys splendens (pictured at the top of the page), the multicoloured Blue-lined dottyback Pseudochromis cyanotaenia, that has striking differences between the sexes and grows to 6cm/2.4” and Pseudochromis fuscus, that is usually imported in its yellow form — there are also brown and white forms — and grows to 10cm/4”.

With all these dottybacks it pays to be careful when stocking, as they tend to share the territorial characteristics of better-known relatives.

This item first appeared in the February 2009 issue of Practical Fishkeeping magazine. It may not be reproduced without written permission.