One year after being introduced to Europe, the Colombian red-fin tetra was becoming a hobby favourite. John Rundle explains how to keep and breed them.

This is a characin — from Colombia of course  — and the first image I saw was of a red/blue reflective body and bright red fins, including the caudal. Its scientific name is Hyphessobrycon colombianus and other common names include Blue and red tetra, Blue and red Colombian tetra and Neon backed tetra

It was discovered by Dieter Bork in 1995 when he collected some specimens which were taken back to Germany and bred. It proved so prolific that within one year it was on sale as a popular aquarium fish throughout Europe.

They inhabit small streams in the Acanti River basin of Colombia where there’s heavy vegetation and tree roots enter the water from the banks, allowing this fish good cover. Replicate this by heavy planting in the aquarium.

How should I keep it?

This tetra makes an ideal aquarium fish, but note a few factors that will help enhance this beautiful fish. It is not one of the smaller popular tetras and can grow to just over 6.5cm/2.6”, making it medium-sized in my book. In the wild they feed and breed in large shoals, so keep them in groups.

My group of ten were in a 120cm/48” breeding stock tank that also contained such as Scissortail rasboras (Rasbora trilineata) and Bronze catfish (Corydoras aeneus).

Colombian red-fins are very active swimmers with large eyes and a good set of teeth — all indicators of a fish good at catching its prey and capable of avoiding being eaten by larger fish. There have been reports of them chasing other tank mates and nipping their fins, but I have never found this to be the case.

The Tiger barb (Puntius tetrazona) has the same reputation, but in a fairly large group appear to lose this trait. It seems they tend to nip when only one or two are in the tank — and the same can be said for the Colombian tetra.

Keep them in a group, but avoid mixing with slower moving fish with flowing fins such as fancy guppies and try to select fish of their own size.

Fishkeepers are generally drawn to their striking colours, but if you fail to keep them in the correct conditions they can look quite plain and not reveal their brilliant reds and blues.

Those conditions include a pH of 6.5-7 and quite soft water. They will tolerate a temperature range of 22-28°C/71-83ºF as they could experience in the wild, but I suggest a fairly constant temperature of 25ºC/77°F. Meet these factors and you should have good coloured fish. 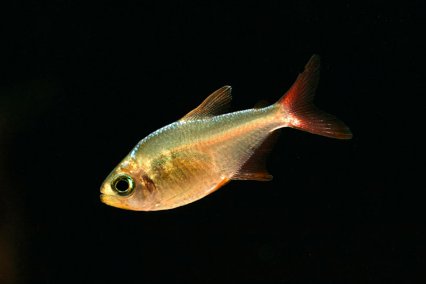 Can they be easily sexed?

The fish I bought could be easily sexed. The male’s defining feature is that the dorsal fin’s front rays have elongated extensions. The dorsal of the female lacks such extensions and is more rounded.

Body shapes also differ. Females are more robust and when in spawning condition their belly region becomes very fat. Do not consider trying to breed if the female doesn’t seem in condition.

Are they easy to breed?

This tetra is a typical egg scatterer and not difficult to breed, and I used a 38 x 30 x 15cm/15 x 12 x 6” tank to house my pair. It was set up in bare tank mode without gravel substrate and contained local very soft tapwater with a pH of 6.5-7. The only hardware was a heater-thermostat set to 25ºC/77°F and sponge-type filter.

I placed three wool-spawning mops: two on the base and one suspended on polystyrene. The best-coloured male and a fat female were then placed  together.

I was lucky enough to witness the spawning procedure and it was something special. The pair would come together side by side and do a complete barrel roll, releasing eggs and sperm into the mops.

Once the pair stop spawning remove them before they get chance to eat the tiny clear semi-adhesive eggs. These are light sensitive, so cover the tank. I use newspaper. In 36 hours the eggs will hatch and the yolk sac larvae should not be fed at this stage.

After another four days they should be free swimming, so remove the paper. The fry are very tiny and for five days they fed on my own cultured infusoria.

I did also feed a future brood with ZM-000 grade powdered food.

The next feed was newly hatched brineshrimp nauplii for the morning and a pinch of ZM-100 powdered fry food in the evening. Regular 25% water changes removed any uneaten brineshrimp or dry food.

When the fry were 25 days old and about 3mm/0.1” in length I moved them to larger growing-on tanks. At 12 weeks they were 2.5cm/1” and starting to show  their colours.  It was not unusual to raise around 200 fish from a brood and what an experience it was!

I’m sure that a balanced diet will help promote their colours, so avoid offering purely flake foods. I used a diet of flake, frozen bloodworm, live Grindalworm and live whiteworm.