Cichlids with a sixth sense Ad Konings reveals a beautiful Aulonocara cichlid that seems to go into a trance to sense food under sand.

When Aulonocara jacobfreibergi sits motionless above the substrate of Lake Malawi it’s using an extraordinary sensory system in its head to locate food moving in the sand below.

As soon as moving prey — be it crustacean, snail or other invertebrate  — is detected, a quick bite into the sand secures it. The fish then chews to separate the prey from sand and either expels the latter through the gills or spits it out.

All members of Aulonocara have this special sensory feature. It’s an enlarged lateral line system comparable to our ears. This makes them much more perception sensitive and is visible as pits and grooves, especially on the lower part of the head.

Other Malawian genera also contain species with similar pressure-wave-sensitive organs — for example Alticorpus and Trematocranus. In Lake Tanganyika several cichlid genera, such as Trematocara and Aulonocranus, have similar sensory pits. All cichlids equipped with such ‘sonar’ use these organs as food detectors, not for detecting predators.

When Aulonocara’s sensory system is activated, territorial males, females and juveniles will all hover about a centimetre above the sandy substrate. Each will barely move a fin and seem asleep.

Suddenly an individual dives into the sand, interrupting this trance-like state!

Now it becomes clear why most sensory pits are where they are on the head. They are registering, with the highest sensitivity, minute movements of crustaceans, snails and other invertebrates in the sand below.

When the first Aulonocara jacobfreibergi were exported from Lake Malawi in the early 1970s they were an immediate hit with aquarium hobbyists. At that time the species had yet to receive its scientific name and its whereabouts in the lake had been kept secret to deter rival exporters.

Because of the sparkling colours displayed by males it quickly earned the trade name in the US of the Malawi Butterfly.

The first specimens were caught at Otter Point in the south of the lake and exported as ‘Trematocranus Trevori’  — being named after Trevor Davies, the son of Hennie and Peter Davies who exported the first consignment of Malawi Butterflies.

It was subsequently scientifically named Trematocranus jacobfreibergi, but is now assigned to Aulonocara. 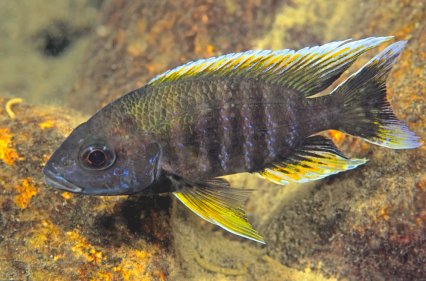 In the original description the type locality is given as Makanjila Island, which is probably a name invented by the exporter shipping out to New York. Such practice was then common as localities were rarely revealed to protect locations and sources.

There’s no such place as Makanjila Island and the type specimens were not collected near Makanjila Point, in the south-eastern part of the lake. Don S Johnson was probably unaware of this deliberate lie and noted the locality named by importer Jack Freiberg who had this beautiful cichlid named after him.

Several geographical variants have since been discovered around Cape Maclear and given fancy trade names such as ‘Trematocranus catherinae’,

‘T. Carolae’, ‘T. Saulosi’, ‘T. Vanessae’, and ‘T. Reginae’. These were coined by Norman Edwards, who took over the Davies export licence after the family left the country and it’s believed he named each of them after his old girlfriends!

However, they are all merely geographical variants of A. jacobfreibergi, which has a widespread distribution along the western lake. On the eastern coast it occurs at Lupingu, north of the Ruhuhu river, and along the shore south of this river between Pombo Rocks and Undu Reef.

Each population has its own male breeding coloration; those in the northern part of the lake are generally yellow-based while southern populations are more orange-blue.

The variant at Undu Reef, the so-called ‘Mamelela’ or ‘Lemon Jake’, has become very popular and some regard this form as different from A. jacobfreibergi. However, this species at Undu Reef has been almost wiped out because of over-fishing by collectors.

Aulonocara are not built to continuously sift and filter sand, like Lethrinops, but the two genera probably share a common ancestor and may represent intermediates between the larger haplochromines and mbuna.

A. jacobfreibergi is mostly found in caves of the shallow rocky habitat and these are often large with muddy bottoms. Early morning divers can witness it foraging from the sand in front of its cave, but it will spend the rest of the day inside.

Some caves are large enough to host several males and, particularly when the bottom is muddy and soft, most males prefer to defend a territory near the cave ceiling. Females and non-breeding males stay near the bottom in search of food and only ripe females swim up to the territorial males to spawn on a rock face away from the mud.

Some species of this genus live over the open sand and spawn in sandy pits, but spawning in all other rock-associated Aulonocara takes place in caves, as is the case in almost all rock-dwelling haplochromines. 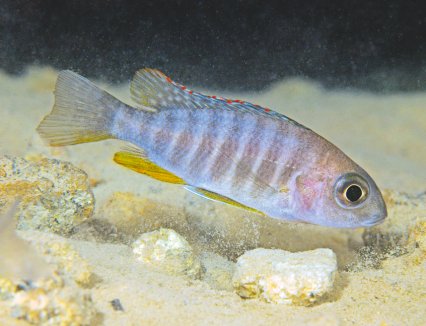 Furthermore, breeding occurs throughout the year and males in breeding dress can be seen at any time and at any location within their range. Maximum size of the geographical variants of A. jacobfreibergi hardly ever exceeds 10cm/4” among wild specimens.

In captivity, where fishes are fed on a protein-rich and easily digestible diet, many known variants may grow considerably larger. In aquarium shows in the USA I have seen A. jacobfreibergi clearly more than 15cm/6”. They were spectacular specimens in full colour and well proportioned.

Those sensory pits in the heads of cave-dwelling A. jacobfreibergi are less enlarged than those of the other members of the genus.

If Aulonocara pits had been developed to sense better in the dark, one would expect the cave dwellers of this genus to have even larger pits — but they don’t. The cave-dwelling species may therefore represent an older branch of the genus, from which other species, those with more sensitive sonars, are derived. 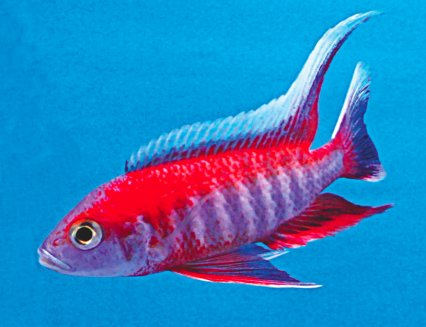 We've got it! The Eureka is explained

The Eureka A. jacobfreibergi, was line bred from original Otter Point stock by Bert Ruisbroek in the Netherlands. 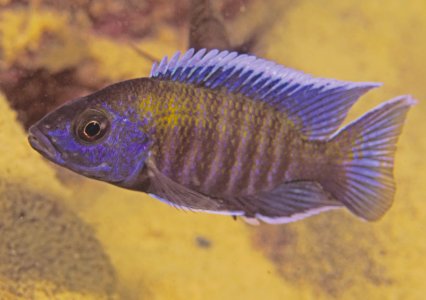 This species, which is darker than A. jacobfreibergi, has been found at other sites around the island and also occurs at Chizumulu Island.

Aulonocara sp. ‘walteri’ is closely related to and perhaps conspecific with a species on the south-eastern coast of the lake, between Meponda and Ntekete. This species, I call Aulonocara sp. ‘trematocranus masinje’ or just ‘Trematocranus Masinje’, is normally found at more than 20m/65’.

At Likoma and Chizumulu A. sp. ‘walteri’ occurs in water sometimes no deeper than 3m/10’. Male coloration, however, is similar in both species (forms), except for the iridescent blue on the snout and lower part of the head in A. sp. ‘walteri’, which is absent in the deeper dwelling A. sp. ‘trematocranus masinje’. 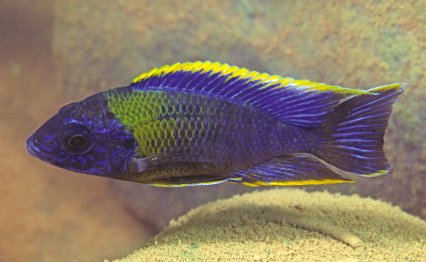 A third dark-coloured Aulonocara – A. sp. ‘lwanda’ (pictured above) – is found at Hai Reef in Tanzania and along the coast near Chiwindi in Mozambique. This species, with trade names such as ‘Aulonocara lwanda’ and ‘Aulonocara Red Top’, lives in shallow, intermediate habitats between 3-10m/10-33’.

Like male A. jacobfreibergi, the other cave-dwellers of the genus defend territories inside caves, with several males sometimes found inside a single large cave.

Males don’t construct anything like a spawning crater. The spawning site is frequently cracks in walls of the cave, sometimes in gaps close to the ceiling, but sometimes on the sandy floor. Females usually forage on the bottom of the cave or outside, near the entrance. They are rarely found on the open sand among other Aulonocara species.

There’s also A. sp. ‘jalo’ — one other Aulonocara found in caves of the intermediate habitat. This interesting species lives around the rocks of Jalo Reef, near Nkhotakota.

The colour pattern of breeding males resembles the yellow form of A. stuartgranti. The mouth, however, is rather large and the sensory pores on the head are less enlarged than in other species of the genus. Large A. sp. ‘trematocranus masinje’ have a similarly large mouth.

There’s no anatomical reason to exclude A. sp. ‘jalo’ from Aulonocara. Its behaviour, however, deviates from the general pattern of this genus as neither males nor females have been seen hovering for food.

Aulonocara sp. ‘jalo’ lives in caves and is a rare sight around the reef. It feeds on invertebrates which it probably finds in the cave. Males defend territories, but wandering males in breeding dress are also seen outside caves.

Male colour pattern, however, has a striking resemblance to some Aulonocara and although it’s been suggested that it not be a Malawi peacock or butterfly, this species undoubtedly belongs to that genus.