Charge of the bite brigade! Jeremy Gay identifies and offers advice on the fish that are most likely to seek out and nip the fins of others.

If seeking peace and harmony in your tanks it’s best to avoid introducing certain troublemaking fish. We accuse these most likely bruisers: 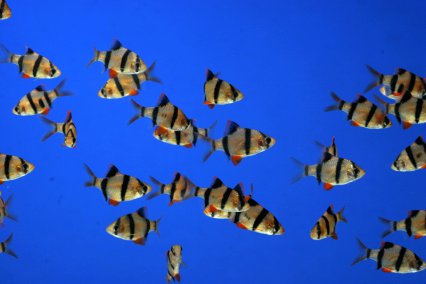 You won’t hear or read about Tiger barbs without also learning that they are fin nippers. The most notorious nipper by far, the Tiger’s reputation precedes it to the extent that some tar all barb species with the same brush.

To combat such aggression, don’t mix Tigers with any of the three target species (see below) and keep them in groups of ideally ten or more. Stock with other short-finned barb species, larger rasboras, danios or loaches and the problem will rarely manifest itself.

Serpae tetras (pictured at top of the page)

The most famous fin-nipping tetra, these small, red, plant-friendly characins are known to nip the fins of the three usual target fish, as mentioned above.

Again, keep in large numbers and with no long-finned fish, and the problem will go away.

Bizarrely a long-finned version of this fish has been produced, so buy some and you will have examples with permanently tatty fins! 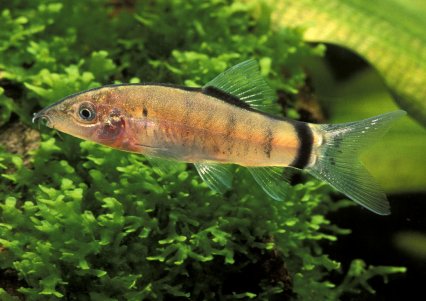 Some loaches have a bad reputation for fin nipping, and because they are more widely available than some others, Skunks top the loach nipping list.

Nipping is likely a case of the fish’s requirements not being met. Keep skunks in large tanks, in large groups and with fast, surface swimming fish like giant danios and you’ll probably not even notice the problem.

So many shop-held loaches are also starving, so a quick meal of fin may be their way of getting by.

Although not top of anyone’s usual list of offenders, PFK staff members have personal experience of both the tiny Bumblebee gobies and Peacock gobies nipping the fins of other fish.

The Peacocks were stocked with some White Cloud Mountain minnows with particularly bright red coloration in their tails. The gobies’ main food was Tetra pro crisp — a similar looking circular red food — so it may have been just be a case of mistaken identity.

Nevertheless, the White Clouds had their tail fins removed by the Peacocks in an alarmingly short space of time…

Tetras feature highly on the nipper roll of dishonour, with Blue emperor tetras (like the badly nipped specimen pictured above) Blue tetras, White spot tetras, Buenos Aires tetras, Blind cave fish and Black widows all known to have a bite or two in them. Many fishkeepers also point the finger at Neon tetras — and Congo tetras nip fins of members of their own shoal if stressed, crowded or in tanks with insufficient swimming space.

Xenotoca eiseni, Jordanella floridae — PFK staff have even witnessed Dwarf gourami nipping fins of male Siamese fighters and any species can potentially produce the odd rogue working out that a fast meal can be quickly stolen.

Most likely to fall victim are angelfish, Siamese fighting fish and male guppies. Don’t mix these three species with known nippers and you may never experience a problem!

Give your fish species ample space and choose larger aquariums where top, middle and bottom swimming fish can all live separately.

Feed them well on a variety of foods and do so little and often several times a day.

Some species are adapted to eat the fins of other fish in the wild as a survival mechanism when times are particularly hard and food isn’t readily available.

African pike characins of the Phago genus have specialised jaws and teeth that make their mouths perfect for removing chunks of fin from other live fish.

Piranha can parasitise other fish in pools in South America and, if you think about it, a fin is a meal that’s readily available, as in a few weeks when it has grown back you can eat it again! Much better than devouring every fish then facing starvation...