Capers in the batcave It had always my dream to find blind cave fish in a dark remote cavern and a chance conversation with a nature-loving friend, who knew of such a location, sent me searching.

My expedition was to a subterranean cascade inside just such a cave in Sarawak in Malaysian Borneo. It was also part of an archaeological site known by only a few outside the project.

Early on my first day my friend John collected me and another pal, Lau, in his four-wheel drive and we headed to the district of Serian. Two hours later we reached the end of a gravel road and in front was a 500m/1,640’ limestone hill covered with lush vegetation. 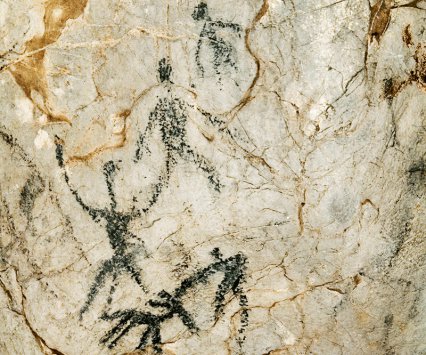 We parked at the base and climbed a staircase built by the locals to a 15 m/50’ cave mouth. Once there, a small corner was fenced off and behind was an ancient charcoal drawing.

We descended a gentle slope slowly and cautiously. The entire ground was covered with bats’ droppings, or guano, and the air filled with a strong urine smell.

When we reached the stream, we washed our hands and shoes to rid ourselves of the guano we touched during our descent.

The stream’s water is crystal clear and slow flowing. There was no sight of fish, except the scavenging freshwater Clea snail which is a scavenger. I saw at least 15 gather around a dead young cave swiftlet (Aerodramus sp.) consuming its dead body.

Virus alert
Inside the cave, humidity was extremely high. I fell a few times on the slippery floor and my hands were cut on razor-sharp limestone rocks. All the wounds had to be treated immediately with antiseptic cream for fear of infection.

Fellow outdoor friends had warned us that some viruses carried by the bats could transmit to humans. We also heard that one caver is still, after several months, in a local hospital undergoing treatment, having been infected with an unknown virus believed transmitted while exploring.

This big cave was full of life. We had to turn off our headlamps occasionally as the lights attracted flying bugs trapped inside the cave. They were not harmful but flew insanely toward us as if they had found sunlight. Some flew directly at our eyes and our noses and I switched to torchlight instead.

The ecosystem inside the cave is always balanced. The bats and cave swiftlets fly out to look for food and return to rest, their droppings becoming food for insects. Then larger predatory animals, such as snakes and giant spiders, prey on these smaller insects and animals. 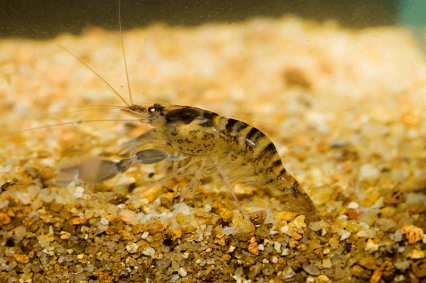 We walked along the stream for few hundred metres and spotted a lot of Macrobrachium species shrimps about 3cm/1.2” long in a pond. This shrimp is a scavenger but also preys on smaller aquatic animals and worms.

It has a pair of hairy pincers and the body a few black stripes. The left pincer is much bigger than the right and, after photographing examples, we continued inside the dark passage.

The cave ceiling was about 6m/20’ high and, when we reached the end of the passage, found a small and narrow tunnel linked to another passage. We managed to squeeze through it and, by the time I crawled out, I stumbled on something in the stream. 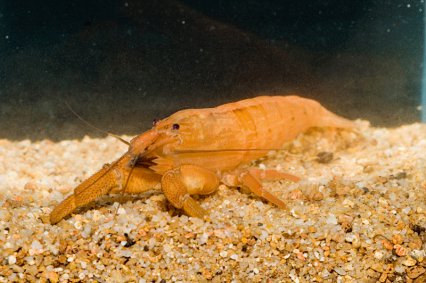 I was shocked to see three orange-coloured Wood shrimps (Atyopsis sp.) swim away to look for a hiding spot. I removed a stone and a 10cm/4” shrimp quickly swam away and followed the strong current.

It ran right into the net I had set up at the lower part of the stream. I took a closer look and discovered it looked the same as the Wood shrimp (Atyopsis moluccensis) found outside the cave.

Those from the cave have very light coloration and are very sensitive to light. This species has fan-like appendages enabling it to capture micro-organisms in the running water. It is very commonly found in fast flowing streams and rivers of Borneo. 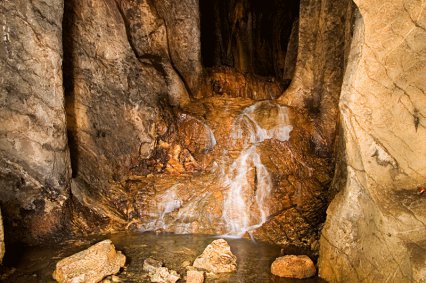 Walking catfish
Further upstream we found a small cascade. When I was setting up my tripod and camera, a white catfish swam by my legs and into hiding. It happened so fast, I just managed to see its tail before it vanished into a dark hole. My best guess was that this was Clarias species.

From the Clariidae family it also known as the Forest walking catfish, being able to ‘walk’ or crawl using its pectoral fins and caudal fin to push forward on land from one pond to another during the dry season. It only travels after dark because the air is cooler and humidity is higher at night. It can also breathe directly from the air.

It has a few pairs of long barbels to help free swimming in a dark environment. The body is also long and slim enough to enable the fish to move around in narrow holes to hide or look for food. At 3pm that day, we decided to leave the cave as we could not find any fish, except that catfish. 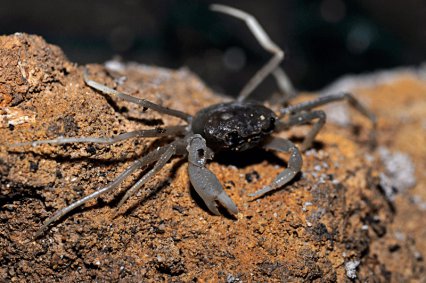 The return
Ten months later I returned to the cave with another group of friends — this time heading for the lower part of the subterranean stream. They spent most of their time snapping pictures in the cave system while I moved off to search for fish.

I was stunned when Danny, one of the group, showed me an image of a long-legged crab on his digital camera. He took me to the spot where he found it, a narrow passage not far from the stream. The wall was full of weird-looking insects, such as long-legged crickets and spiders.

There was a small pothole under our feet which contained stagnant water. A few white and black crabs crawled away to find hideaways as they do not enjoy exposure under lights. The long-legged crab was later identified by a researcher as Stygothelphusa species.

Moving to a small passage, we saw a few swiftlet nests with eggs and young chicks hanging on the vertical wall. This species is just like the bat which has an echo-locate ability to fly freely inside the dark cave. The swiftlet nest is edible after cleaning and nest soup is one of the most expensive dishes served by some Chinese restaurants.

Due to high demand for the nest, nearby villagers annually collect them. Most are built in the vertical wall high above the ground, so collectors risk their lives with bamboo and rope ladders.

When we visited the cave it wasn’t nest collecting season, so there was no sign of any human — just abandoned bamboos. 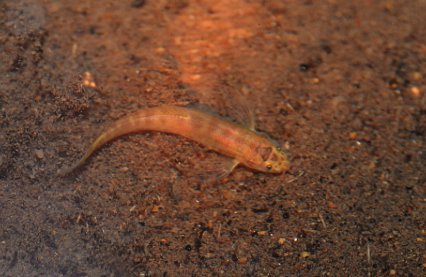 While enjoying some beautiful stalagmites and stalactites, I saw something move in the water. When I moved closer, I was amazed to see loaches at the bottom of the stream! They looked like Nemacheilus saravacensis which can be found abundantly outside the cave. However, this loach is light brown with very few black stripes on its body. It has a pair of eyes seemed very sensitive to the light.

I believe the cave loach I witnessed was in fact N. saravacensis trapped inside this dark stream for a very long time.

This is a type of hill stream loach belonging to Cyprinidae family. The species has dark cross bands encircling its body and it is widespread across western Borneo. Due to the dark environment, it slowly evolved inside the cave.

The most obvious change is body coloration and, in this permanent darkness, does not need the black stripes or cross bands as camouflage. Instead it has faded stripes across the body.

It also has three pairs of barbels near the mouth, which enable it to move around and prey for aquatic insects or crustaceans in the bottom of the stream.

Due to the lack of any predator, this fish did not appear worried when I walked near. I used a small net to scoop it up and took a few specimens back for my aquarium. It survives well in my tank but only comes out at night when I turn off the light. Like other loaches, it is a bottom dweller and a good scavenger, eating whatever fish food is left over.

After a further few hours of exploration, we found another passage leading to the upper most of the subterranean stream. However, we then had to return to the cave mouth as it was getting late and our torchlight batteries were failing.

This item first appeared in the June 2009 issue of Practical Fishkeeping magazine. It may not be reproduced without written permission.