Biotopes of Peru: Daring to be first Warned about entering a hitherto unexplored Peruvian backwater, Heiko Bleher proves that defiance can be rewarded with some marvellous discoveries.

The boat owner thought I was crazy. "You want to chance it with indian tribes which had yet to see a white man? The military might not even let you go!" he said.

Our conversation was taking place in Tabatinga, Brazil, at the border of Colombia and Peru, and I wanted to go far into unknown territory near the Brazilian border with Peru up the 1100 km/680 mile long Yavari river.

However, he relented and our party and guides left from Leticia immediately after getting 'exit' stamps on our passports from the Colombian authorities. I was on my way to Caño Arabella…

The sun set early and in the darkness Stefen, one of our guides, saw just enough to find a short cut from the Solimões to the Yavari. The latter is a white water tributary of the Solimões and forms a boundary between Brazil and Peru for more than 900 km/560 miles. 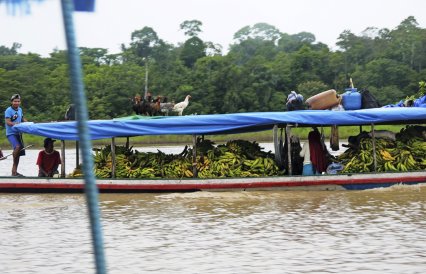 It took us three days to reach the mouth of the Mirim, passing several settlements along the Peruvian side of the Yavari, mostly cattle ranching and indian villages. Along the Brazilian side, where the river is called the Javary, we saw few settlements on the second and third days until we reached a native settlement with the sign declaring it was protected land and entry was prohibited.

I spoke in Portuguese to the only indian I saw about a short cut to where we wanted to camp and away from the main river. He directed us to one on unrestricted land but it look us almost three hours to cut all the bushes and trees to get the boat there.

However, we had found paradise! Fish were jumping, hundreds of herons and cormorants and red macaws were flying over our heads, like every creature wanted to say 'welcome'. We found an area to camp and in seconds had piranhas on the hook, along with other fishes, for dinner.

A half-day boat ride below the mouth of the Mirim, took us to the Brazilian military outpost of Estirão do Equador on the right bank and as we travelled along the Peruvian left bank a military launch forced us to turn back and report to the authorities. It took nearly four hours to get clearance to continue. 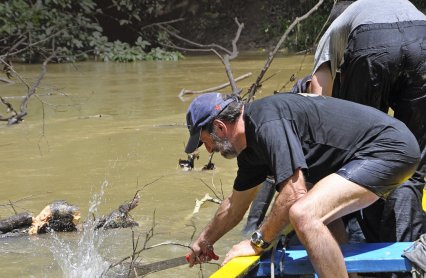 We continued upriver early next morning, finally reaching the "entrance" to the Mirim. It wasn’t easy to find and less than 50m/165’ wide at its mouth and overgrown by dense rainforest.

Two hours later we reached a Peruvian checkpoint and soldiers there told me that the entrance to the Arabella and its two tributaries was not far up the Mirim. All have mixed black water like the Mirim, as the sediment-rich Yavari waters influence everywhere else. 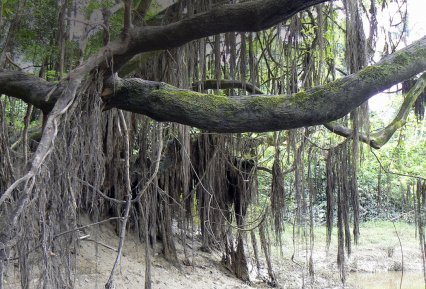 We reached Arabella about two hours later. Entering this 30m/100’ wide lagoon was another world, even more virgin than the Mirim. There were roots from giant trees looking hundreds of years old hanging in the water. Eagles flew high, bustards lower, toucans crossed the riverbed.

I saw a small creek merging at the right bank. I climbed high up with my hand net to find deeper water inside the jungle, as at its mouth access was impossible. I found the creek I sought between high primary rainforest trees.

I had to climb down as water levels had dropped, which was excellent as all the species there were concentrated in the remaining body of water. 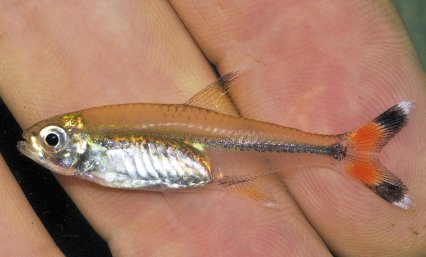 With the first netting I had a beautiful and certainly un-described Hemigrammus species. It was as long as H. bleheri, at 4.5-5.5cm/1-8-2.2” TL and with a tail in bright colours as orange-red, jet-black and snow-white. I also collected what could be a second Hemigrammus species with yellow in the tail instead of the colours of the former. 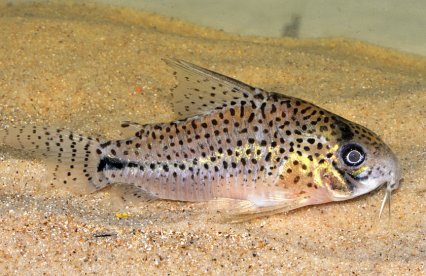 The water was clear with no aquatic vegetation, only lots of leaf and driftwood. 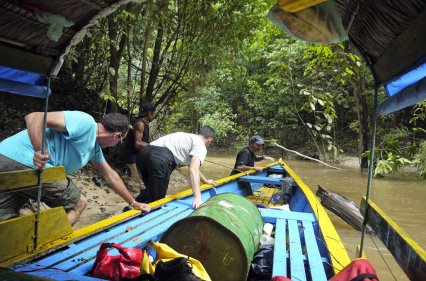 My next collecting spot was two hours further up the Arabella. I’m sure no boat had ever been further as we had to remove hundreds of ancient logs and fallen in leaf-less trees. It was proving to be a real jungle adventure!

We came to a stop at the Capivara.

The water level there was so shallow that the boat was halted and there were many semi-sunken trees barring our way.

Over sandy ground, with Cyperus growing along the edges and Spatiphyllum in more shady areas, we found more species. There was a beautiful Pimelodus with three or four golden stripes, Farlowella, another Otocinclus and Peckoltia species and a third Corydoras species, which belongs to the C. elegans group (my Cory. sp. 3).

Stefen took a very large Serrasalmus immaculatus, as well as smaller Serrasalmus species ashore and he had a Ageneiosus cf. magoi on the hook. They were enough for a fine dinner …

In total I researched in 19 rivers, creeks and lakes, recording in three days and nights 152 fish species, of which 50 seem new to science and the hobby. 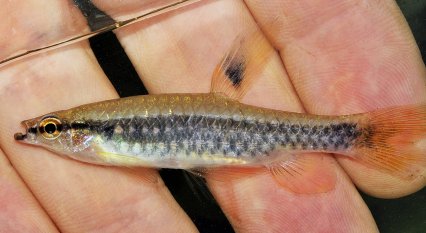 The new Hemigrammus, Moenkhausia, Pyrrhulina (pictured above), Aequidens and fantastic Apistogramma and Corydoras species will I’m sure bring joy to many enthusiasts with biotope correct aquariums. 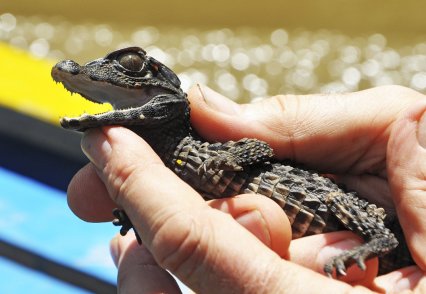 Delights on dry land too

Travelling for almost nine days and 1,850 river kilometres (1,150 miles) I had recorded an amazing flora and fauna above and below water — including the world’s rarest and smallest crocodile, the Babo morichalero (Paleosuchus palpebrosus) that’s pictured here.

I had heard and seen traces of jaguar, seen two or three monkey herds jumping along the river edges in the trees, and endless herds of capybara (Hydrochoerus hydrochaeris).

Some of the fish of the Caño Arabella expedition 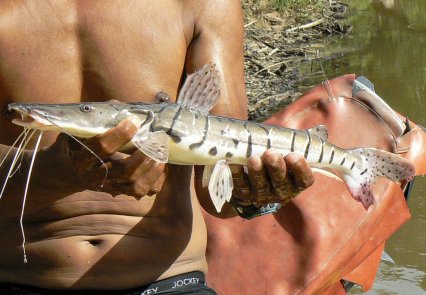 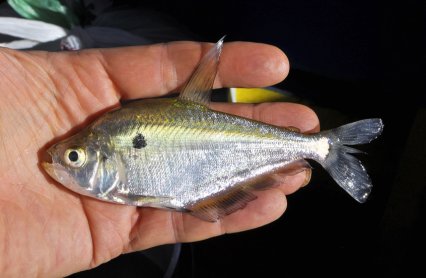 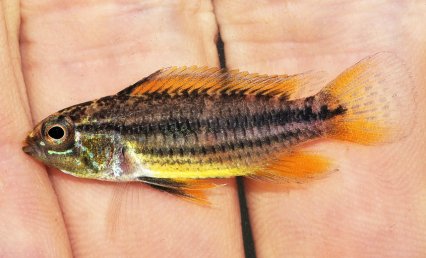 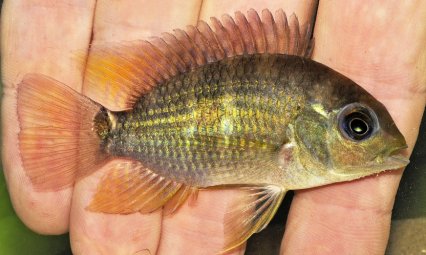 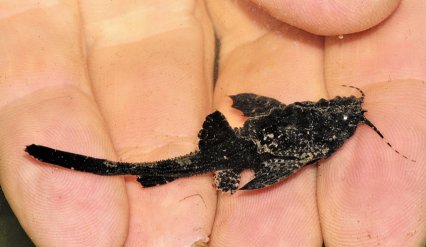 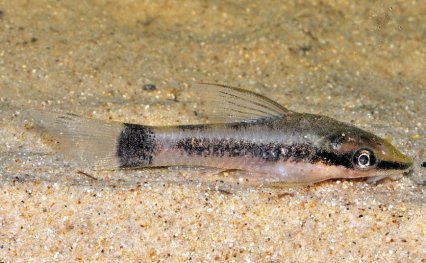 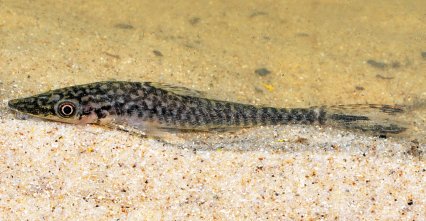 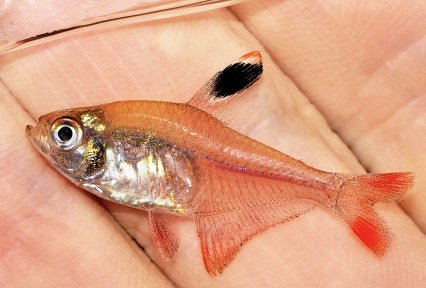 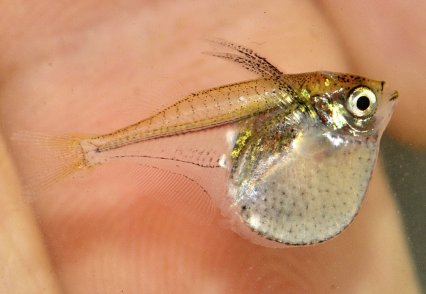 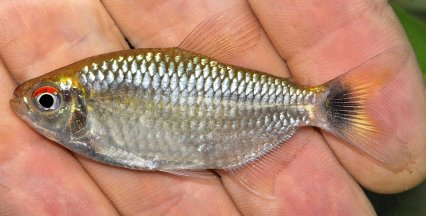 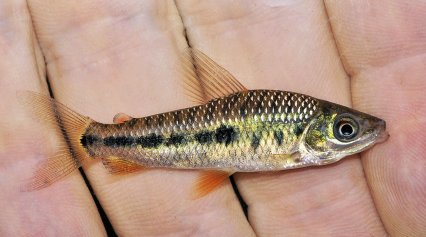 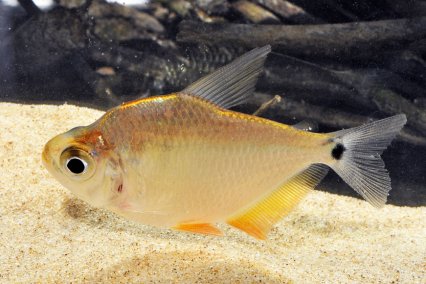 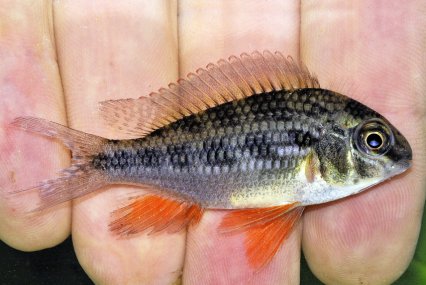 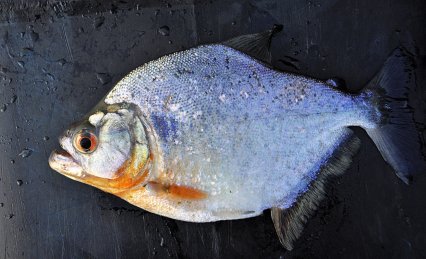