Nathan Hill reveals a fish more feared for its hunting prowess above water than in it.

For many, the Silver arowana is the definitive big fish. Related to mighty Arapaima, this fish is not only coveted but in some cases culturally revered — or at least its Asiatic cousins are.

Visually, there’s little mistaking an American arowana for anything else. Having gigantic scales, stylish wispy beards and powerful, sleek body, they look unlike anything else that roams the waters.

Silver arowana are endemic to South America, in the Amazon basin through French Guiana, Peru and Brazil, and it’s speculated that they haven’t become more widespread only because they can’t navigate rapids and torrential flows.

In the wild, these are spectacular hunters, though at the top of their game above the waterline rather than under it. Their ability to launch from the water has the locals calling them 'water monkeys' — and leaping is something at which they excel.

This behaviour is a response to life in the flooded forests where they are common. Here, limited food resources are dispersed over vast areas and niches must be found to exploit what there is.

They are also found hunting along shorelines, inhabiting blackwater lagoons, as well as the littoral zones of rivers and lakes. They are always in shallower areas of water too where the depths offer no benefits.

They launch to snatch at terrestrial insects, but they’re not particularly fussy. Spiders form a large part of the diet, as do beetles, which may be their preference if gut analyses are indicative. Small birds have been eaten, even snakes hanging from overhangs. Other less usual snacks can include crabs, snails and even monkey droppings.

When they leap they often get a side salad of the vegetation the prey had sat on, though it’s not considered essential to offer them green food supplements.

In the aquarium, this propensity to feed from above the waterline is not catered for by all that many aquarists. Instead it’s expected that the fish will take a variety of dried, fresh and frozen foods below the water surface.

Unfortunately this damages the fish and results in a condition called ‘drop eye’ whereby one or both eyes permanently look down, eventually refusing to return to normal. It’s a direct result of adapting to feed from meals on the base of aquaria.

Foreign keepers who use live fish to feed their arowana report the same symptom.

Always try to offer a floating food or train your fish to take from the surface alone. That means interacting and getting involved at every mealtime to get your fish accustomed to feeding from specific points in the tank — and offering a little at a time so food does not sink past.

'Drop eye' also seems more prevalent when these fish are kept alongside other species that swim beneath them. 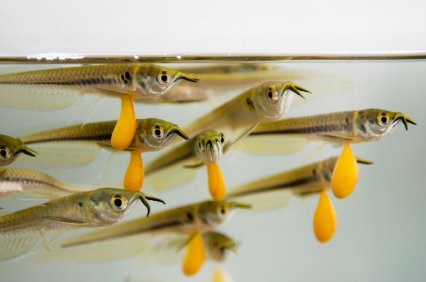 Some speculate that arowana have superb eyesight and can make compensating calculations for refraction prior to leaping. However, it seems likelier that the reason for the monstrous maw is a morphological offset to compensate for rubbish vision!

Arowana in the wild often take surprisingly small meals per leap, and mouth size may compensate for terrible aim, or at least increase chances of snatching food.

Just because they have an almighty opening they do not necessarily need gigantic meals. Even for adults, crickets and locusts, earthworms, prawns, mussels, cockles and chunks of fish are more than ample.

Striking above or below water affects posture. When priming for an airborne launch they form a spectacular, anguine ‘S’ shape before take-off, though if underwater will often opt for a ‘C’ shaped curve.

Wild fish have been noted to hide behind fallen trees when in hunting mode, curled and waiting…

That gigantic mouth is also used for spawning. American arowana are mouthbrooders, with the male carrying the young a good two months until their yolk sacs are depleted. Often both wild and farmed fish are harvested at this stage, with adult males being frightened or coerced into dropping their young into the nets of collectors and then traded.

Don’t buy an arowana while it still has its yolk sac, as at this stage it will not yet be feeding. Moving yolked juveniles is irresponsible as, if ruptured in transit, the fish is almost certainly doomed. 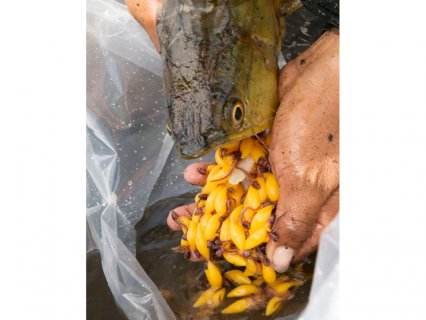 Spawning arowana form pairs while young, though trying to pair them off in an aquarium is rather futile. Dedicated breeders use huge concrete or clay pools and a massive area is required for success.

Given the high commercial value of exporting arowana, there have been numerous disputes and accusations involving wild harvesters — giant otters once being blamed for reducing stocks, although evidence was lacking.

Given that arowana spawn only once a year, it’s now considered likely that excess harvesting is impacting on populations.

The drawback in keeping these fish is their size. Even aquarium specimens attain around 90cm/36”, and wild fish can be larger still.

Some sources cite a 240 x 90 x 90cm/95 x 35 x 35” tank as sufficient for a single adult, but not everyone would agree. Based on the ‘six times’ rule a 6m/20’ tank is required, which eliminates nearly every private aquarist, aside those with tropical ponds. 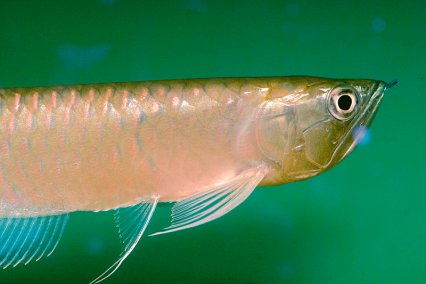 Essential if keeping arowana is a well fitting, jump-proof hood. If left open topped they will leap. They just can’t help themselves!

Also be wary for your own safety. That giant, toothy mouth and urge to fly at anything slightly food shaped means that the aquarist can soon become the snack if any food is inappropriately offered via the fingertips.

If wanting to see that jumping behaviour you’ll need long tongs or some kind of feeding stick.

Setting up a tank, aside the size issue, is easy. In a nutshell arowana are not fussed what’s going on beneath them, so décor is redundant. For authenticity opt for plenty of fallen branches, leaf litter and fine sands, but also be aware these big fish also produce lots of waste and frequent water changes, and waste syphoning is essential.

There’s good reason so many Far Eastern keepers opt to house theirs in barren tanks devoid of any décor.

As appealing as these are, don’t be inclined to buy a juvenile unless certain you can provide for it. Young fish are visually more pleasing than adults and it’s easy to get suckered in. Yet later you may struggle to find anyone sympathetic to requests for rehoming and you’ll be lumbered with a fish that may be bigger and more demanding than a small dog. 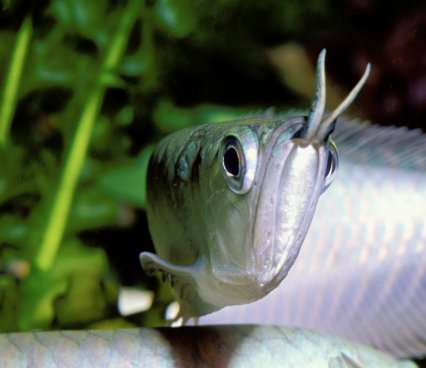 Compatibility: It can be kept with other fish too large to be eaten, though this may increase incidence of 'drop eye'.

Breeding: Not known in aquaria. 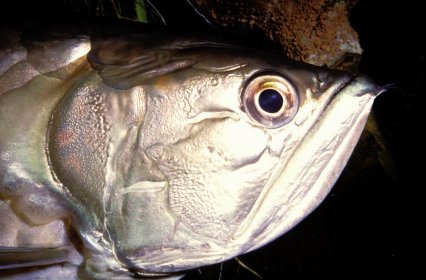 Feeding: Slight omnivore with carnivore leanings and eats the same as Silver arowana. Wild specimens have even been reported with remains of small monkeys in among gut content

Captivity: Keep this with fish too large to be eaten, though tank mates may be linked to 'drop eye.'

In Chinese culture fish are indicative of abundance, while dragons are associated with wealth and prosperity.

The arowana’s ability to combine the two features in one handy package makes them highly desirable to keep.

Asian varieties are so highly prized that they are even anecdotally connected to some Triad gangs and gangsters.

Arowana make for excellent eating, given their low fat, high protein nature. The Caboclo people of the Amazon feed them to women who have recently given birth, so highly regarded is the fish’s nutritional value.