Nathan Hill rekindles a love affair with a destructive land traveller the rest of the world has come to hate.

They turn up unannounced and eat all your food. Then when they’ve guzzled everything you’ve got they’ll either pick a fight or hop across land to find somewhere better.

Clarias catfish are a hard bunch and, from an aquarium point of view, probably one of the hardest fish to get wrong.

They’re bulky lumps too, which is why they’re so popular in aquaculture. They fatten up fast, gorging on everything you offer — and quite a lot of what you don’t — and, in next to no time, they’re plumped up and ready for the table. 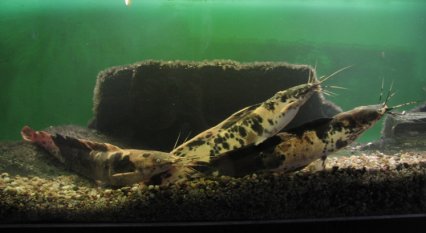 Even Clarias batrachus, the 'aquarium friendly' species we occasionally see, will officially reach more than 1m/3.3’ in length. It’s also been claimed that a fisherman once caught one weighing 66kg/146lb.

The world despises feral Clarias. Some escaped in North America in the 1960s and they’ve stayed put ever since. Originally the fish came from a wide habitat in South-East Asia, and now you’ll find it in most countries that way. Sri Lanka, India, Pakistan, Burma (Myanmar), Singapore, Java, and loads more have Clarias doing the rounds.

They’re becoming universally banned for good reason, seeing how destructive they can be. Thankfully, in the UK our waters would be too cool for them to overwinter, but any aquarist who’s had them can testify how voracious they are.

Wild Clarias like insects and fish, but don’t care whether food is dead or alive. It’s almost as though they lack the sense to tell the difference. Carrion or fresh, they’ll take the lot.

It seems the younger cats prefer insect food, while adults have a thing for smaller fish, fry and eggs.

Part of the problem is keeping the things in one place. Clarias are known as ‘walking’ catfish, although to ascribe that word to their clumsy waddle may be generous. They don’t ‘walk’ using their pectoral fins, however, but use those side appendages to anchor to the ground and stop their bodies jackknifing as they try to wriggle along the floor.

The fishkeeper therefore has a problem. The fish are the perfect escape artists. Not only will they search for and find any gap in a loose fitting canopy, they’ll put a good distance between themselves and the tank.

Clarias can spend ages out of the water. Adapted gills mean they can breathe atmospheric air like you and I. Researchers found that they could survive up to 31 hours out of water, provided they stayed wet.

That in itself works to the catfishes’ favour, as they’ll nestle in damp mud during drought. They literally go underground until things pick up.

Clarias have high amounts of haemoglobin in their blood, aside other unique adaptations.

Unlike other fish, their gills and supporting archways are pretty rigid to stop them collapsing when roaming. It’s calculated that the fish gets about 60% of its oxygen from atmospheric air. In water, with no oxygen, they’ll go for days before running into a problem.

They breathe through the skin, too. Of all of the oxygen they take while submerged, about 17% arrives through their dermis.

Good weather restricts any strolling. When it’s sunny and dry the fish stay in the drink, but, when it rains, it’s time to spread those fins and go for a wander. 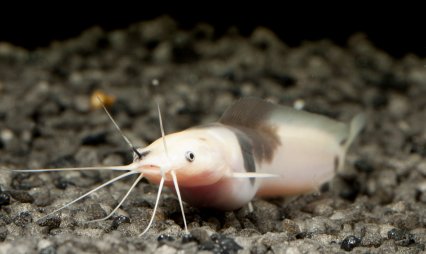 These are near irresistible when young. They’re cute, active and if you stumble across the usual mottled ones on sale they’re also strikingly marked.

Activity levels confuse and distress tank mates. They are pretty much relentless; going along the front, up sides, down sides, around the fish, through pipes, and trying through the fish as well!

Whether they are brave or superbly dumb is unknown, although likely the latter. In a fight, they will not back down. Big cichlids are an annoyance, other aggressive catfish a joke. They’ll scrap and usually win.

Clarias have a venomous sting. In front of the dorsal fin and alongside the pectorals are defensive daggers that the fish will happily use in a ruck — and against any handler, too.

Stung by C. batrachus, you’ll yelp and maybe have something akin to the worst bee sting, but some other species are more potent. African Clarias have even been known to hospitalise victims.

Like many catfish, Clarias have an excellent sense of taste. Taste buds sit in the lips and barbels, as you’d expect, but there’s an incredibly high count in the dorsal fins too.

Another unusual feature are cones in their tiny eyes. If Clarias lose eyes they don’t seem handicapped, but the discovery of cones offers the tiniest hint that, like us, they have colour vision. For a fish that spends so much time in turbid, dark waters, the notion of advanced vision is surprising.

Can you really house one of these fish? Clarias get large, although it’s rare to see one more than 45cm/18” in a tank.

Based on the six times rule, you’d need a hypothetical 6m/20’ aquarium for an adult – but, given activity levels, something bigger would probably be wise.

Clarias are cheap — and cheap and cute is a devastating combination. I’ve got perilously close to putting my hand in my pocket when seeing juveniles…

To get that level of movement and those attractive colours for under £5 is so tempting.

Whatever you feel about them,  I’d never buy one and recommend that you don’t either.  Fascinating, but due to rapid growth and a very cheap price, they are destined to be dumped on public aquaria. 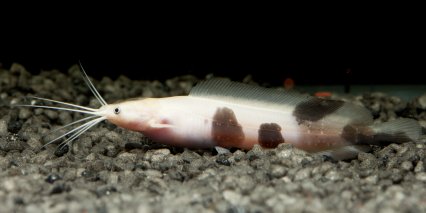 How can I keep a walking catfish?

Décor, tank mates and water for Clarias are some of the easiest things to arrange.

Water parameters can be pretty much anywhere. Hardness and pH seem relatively unimportant, unless taken to an extreme. A value between 6.0 and 8.0 is usually tolerated with no ill effects.

Clarias are even found at salinities of up to 18ppt, seemingly without any problems.

Temperature should be in a middling tropical range and 24-26°C/75-79°F is fine, but they’ll go much higher and lower.

Tank layout should be quite minimal, as In the wild they’ll inhabit muddy swamps, rivers, lakes, ponds, puddles, rice paddies and pretty much everything else.

Décor can be near non-extant. A cave may or may not be used, but usually the catfish is doing too much to use it. Avoid substrates that can be stirred up, but even gravel will be moved.

Ensure the tank lid is secure and immobile. Given a gap, Clarias take it and are on the floor. Sometimes, provided that your cat doesn’t get to the fish first, no real harm will be done and the fish can be resubmerged.

However, carpets can wick water from a fish fast and modern, dry, centrally heated houses are far removed from damp, rainy grasslands.

Tank mates should be avoided, aside other Clarias. Trouble will eventually break out and come to stress any fish smarter than the cat.

Are these cats disease prone?

Wild Clarias are riddled with parasites, both internal and external. Worms, flukes and protozoa are rife, and they seem to sponge up more as they go along.

In the aquarium problems are generally still skin based.  You’ll never see a wild Clarias on offer, but by nature of their naked, slime-heavy bodies, those commercially available are more susceptible to Gyrodactylus and Trichodina than many others.

The first sign is often secondary infection of bacteria. Reddened patches, sometimes compounded with ulceration, are often an indication that the fish is carrying passengers — or has been fighting.

If your Clarias has red inflamed skin, get it scraped and any surface parasites microscopically identified.