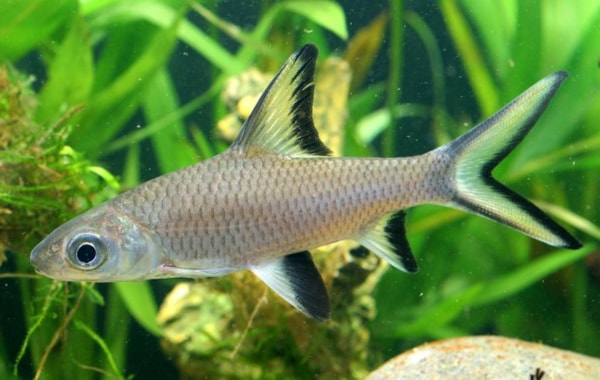 New fishkeepers are inevitably drawn to freshwater â€œsharksâ€. Jeremy Gay looks at what's regularly available and advises on which are suitable for home aquaria.

Freshwater "sharks" are popular tropical fish stocked the length and breadth of the country. In no way related to marine sharks, they bear just a passing resemblance to them with those similar elongate bodies and quite rigid angular fins. However, they are highly prized by new tank owners and often bought for the community aquarium.

With the exception of two catfish also featured here, the sharks all belong to the group Cypriniformes and family Cyprinidae. This group includes the barbs, rasboras, loaches and even goldfish — and our "sharks" naturally inhabit rivers in Asia and Africa.

Roughly speaking, they can be split into two main types: territorial bottom dwelling and midwater shoaling species. Knowing which one you have or intend to have is important, as mistakes will mean fights. Check out their characteristics… 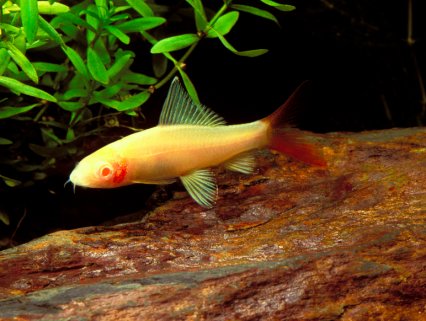 These include the most well-known Red-tailed black shark, the Rainbow or Ruby shark, the Black shark from Asia and the less commonly seen African sharks like the Harlequin.

These are territorial in the aquarium because in nature they are grazers and must protect a patch of river so that algae can grow and they can eat it.

If others of their kind come along their food source may be in danger, so they chase away their own ilk and any other fish they perceive to be a competitive grazer. See the potential problem here?

In the aquarium our fish don’t want for any food, but the Red-tailed black shark, for example, doesn’t know that and is desperate to ensure that there’s a patch of aquarium décor and substrate exclusive to him.

However, our tanks are small in comparison to natural territories, so the shark wants to clear the area and beyond of any potential competitors. The other fish cannot get out of the way, so further frustrating the shark and causing particularly aggressive behaviour. It’s not the fault of the shark or unwitting trespasser, but we can help by not stocking sharks in tanks that are too small — and we’re talking 120cm/48" minimum for Red-tailed black and Ruby sharks.

We should also avoid stocking them alongside other grazers, or other similarly patterned or shaped species — certainly not with others of their own kind.

Here are some of the most popular species and their requirements: 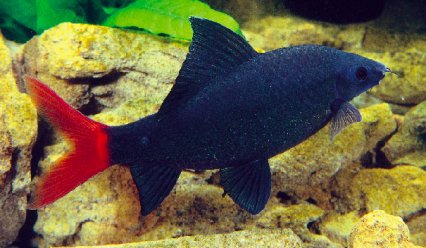 Origin: Thailand, but now probably extinct in the wild.

Notes: A truly stunning fish with jet back body and crimson tail fin. Mature specimens may also develop a white tip to the dorsal and a green metallic sheen. It’s also available in albino and the name is often abbreviated to RTBS. 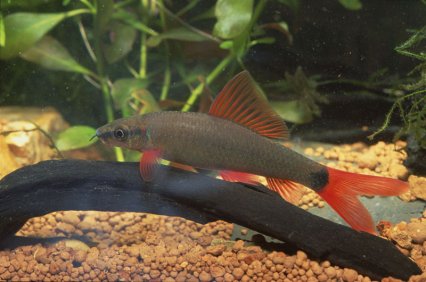 Notes: Ruby sharks are almost as popular as RTBS and look superficially similar, apart from all the fins being red and the body grey rather than black. They get more intense colours as they mature and under ideal conditions and, like RTBS, are very territorial. These are often rehomed by shops after terrorising the other inhabitants of small domestic tanks. 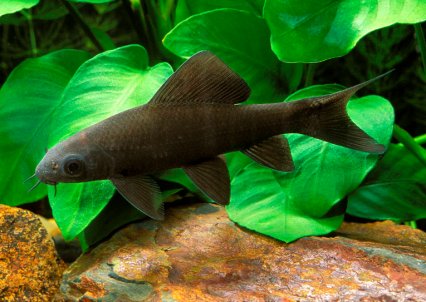 Notes: This species grows deceptively massive, though, despite this, they are regularly on sale as juveniles.

Very territorial, these fish have the size to match and some of them become 'one fish one tank' specimens and a burden on their owners. Definitely one to avoid. 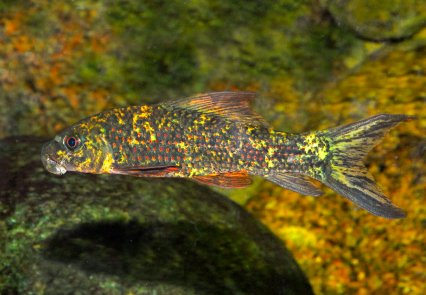 Origin: Democratic Republic of the Congo (DRC) and Gabon, Africa.

Notes: Harlequin sharks look more Garra-like than the Asian sharks and have interesting markings. Imported via specialist wholesalers, they represent something different for the oddball or West African biotope tank — though, like the Asian fish, they become more territorial and less tolerant of each other as they grow.

The most popular representative of this group by far is the Silver shark, also known as the Bala shark. Such shoaling species need to be kept as five or more, with open water for exercise and no aggressive tank mates.

The Silver shark exceeds 30cm/12" in length so will need an aquarium of 180cm/71". Multiply this by five 30cm/12" tank mates and you have a big housing problem…

Unlike the bullish, territorial sharks, the shoaling species are right at the other end of the scale in terms of aggression and could even be described as shy and skittish. A sudden fright and these will dart across the tank with a flick of the tail, careering into the glass and risking injury. They are also prone to jumping out of open-topped tanks and should not be kept with aggressive or territorial fish, especially territorial sharks —the RTBS and Silver shark being an ill-fated combination.

With the size and bulk of the Silver shark comes the odd accident too, as when they get to 15cm/6" plus they are known to snack on the odd Neon. They’re not particularly predatory by nature, but grow so quickly that tiny tank mates can soon feature on the menu.

The Apollo shark is even more likely to snack on fish, so only keep them with fish too large to be eaten at 8cm/3" plus. 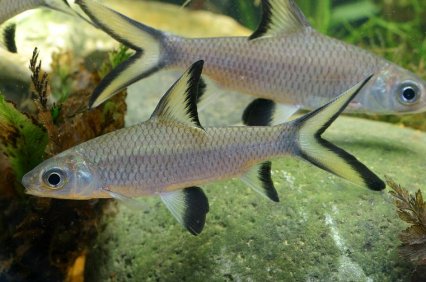 Notes: A very popular fish, but rarely sold for suitably large accommodation. They look great in a group in a furnished tank, without aggressive tank mates. Fish in good condition develop more intense coloration in the fins. Females are larger and deeper bodied. 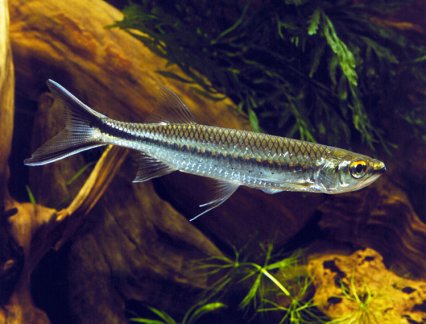 Notes: This is a fast, streamlined surface swimmer from clear forest streams and rivers. A beautiful fish, it needs a long tank with water flow to exercise properly and no aggressive tank mates. Make sure the tank has a tight lid to prevent jumping. 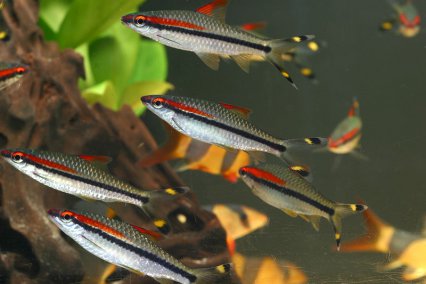 Notes: Not even a freshwater shark, this fish is a barb proper, but may be seen for sale occasionally as the Rosyline shark. Needs well oxygenated, well filtered water and the company of its own kind. Hugely popular, but deserving of space and experienced owners. 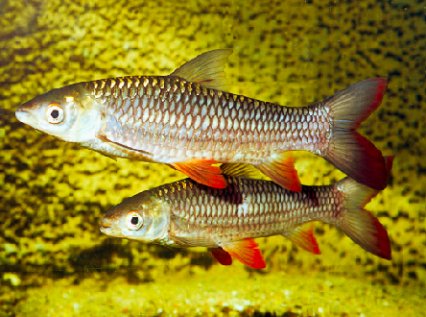 Notes: These fish grow far too large for aquaria, though, sadly, are still sold. Juveniles carry a horizontal black stripe with red edges to the tail and they are known as mad fish because they become intoxicated when eating the seeds of a certain tree in Asia. Adults are hard to rehome and are a problem for public aquaria. Avoid. 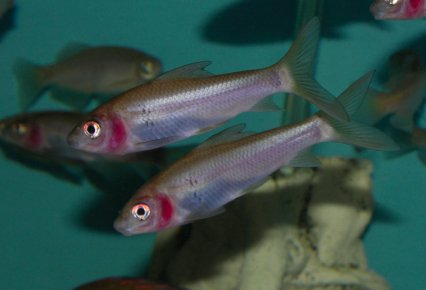 Notes: This species has only been available in the last ten years, marketed as the Violet blushing shark by Indian exporters. It’s placid, but can grow large and looks quite non-descript when fully grown. Great for the large Indian biotope tank, although too drab and uninteresting for most.

The Shark catfish perhaps looks most like the true marine sharks and backs it up with silver coloration. Large, and ranging from pretty unsuitable to ludicrously unsuitable, Shark catfish are popular with unwitting, unaware or uncaring fishkeepers.

This fish does, however, go out to sea, being a brackish and estuarine roamer, and brackish is how they should be kept. The problem, however, is that these cats reach over 30cm/12" in length and have a huge space requirement. Even an 245cm/8' aquarium wouldn’t cut it long term for a group.

The Iridescent shark is also a big problem in many ways. Because of its vague shark shape it’s a popular aquarium fish. It tops 90cm/35" in the wild, yet is a small species in a genus with species reaching more than 2m/80" in length.

Combine a huge, active fish with migratory paths in the wild, predatory tendencies and a need to be kept in groups and if you don’t own a converted swimming pool forget shark catfish. Even juveniles are not cut out for life between glass walls, as they frequently swim straight into them and injure themselves.

Pangasianodon represent one of the biggest problems in tropical fishkeeping because their appeal and cheap price when young and small leads to a lack of suitable accommodation and suitable owners when large. Steer clear of these and if your retailer insists they only get to 23cm/9", don’t shop there again! 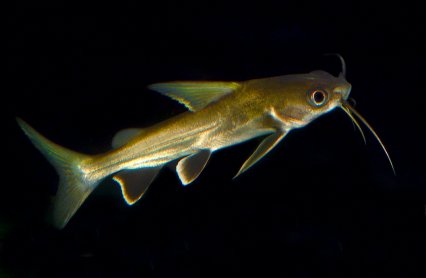 Notes: This needs a brackish biotope tank, company of its own kind and lots of room. Usually for sale at just a few inches, these catfish are undoubtedly attractive, although few, if any, households would be able to accommodate adults. They are sold as Arius seemanni or Arius jordani. Avoid. 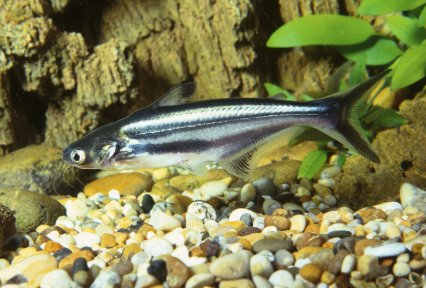 Tank size: Unsuitable for home aquaria, due to size and habits.

Notes: If there was ever a case of a fish being unsuitable for aquaria this is it. Pelagic, migratory swimmers, these fish need miles of water and they are not adapted to avoid bumping into tank glass. See my introduction for more details. Avoid — and spread the word! 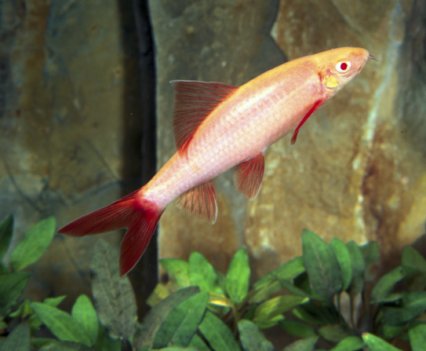 Can I breed freshwater sharks?

Breeding any fish in captivity is technically possible, although, to date, no one breeds any freshwater sharks naturally in captivity. Instead they are bred commercially using hormones and the female is killed to enable this to happen.

What stops them breeding in captivity? The fact that the territorial species hate each other is a big factor and you would need a huge area for males and females to carve out territory and tolerate each other.

Maturity of fish may also be a factor, as there aren’t many fully grown, sexually mature adults in aquaria.

With both territorial and shoaling species it may be that our tanks are lacking the right environmental triggers like dry seasons followed by wet, and seasonal flooding. We’re pretty sure that someone has bred these fish somewhere, but it was probably by accident.