What gives a fish its value? Is there a higher objective structure to what we pay, or are we being played off for chumps? Nathan Hill looks at some of the factors involved.

I don’t mean to brag, but I’ve probably seen more shops and more fish in the UK than any of you. After all, it has been my job to go around the country visiting them all for the last decade.

That puts me in a pretty good position to know what the typical costs of fish are, how they fluctuate by region, and just how much some of them can fluctuate by. The greatest discrepancy I’ve found to date is the oddball Butterfly fish, Pantodon buchholzi — the freshwater one that looks like a chunk of floating wood, not the needle-nosed marine types that usually starve to death. The lowest I’ve seen them on sale is £3.50 each. The most — and for fish not particularly bigger or more impressive than the cheaper counterparts — were a staggering £35 a head. Ten times more expensive.

Now I’ve written about why fish cost so much in the past, so I don’t want to re-explore the same territory. But since I wrote that piece some years ago, I have noticed a couple of things. Specifically, some fish have sold for record highs, and some seemingly commonplace fish seem inexplicably pricey.

Most expensive in the world

Let’s look at the three most expensive types of fish ever sold, and see if there are and clues as to why they cost so much.

First up is a Bluefin tuna, and not as a one-off a because another Bluefin sold a few years back was equally costly. But anyway, a single dead fish, bought by the owner of a chain of sushi restaurants across Japan, and destined for the plate. The fish weighed in at 278kg, so it wasn’t a tiddler. But still, what do you think that cost?

Tuna buying at Japan’s Tsukiji fish market has a long history of being grandiose, and it’s only the first fish offered that sells for such a stupendous sum.

The reason for that is prestige. In Japan, there’s a status attached to being the owner of the first fish from the annual tuna auctions, and bidders (of which there tend to be only a couple in permanent deadlock) clamber over each other to push the price into absurd figures.

In 2013, another Bluefin made headlines from Tsukiji when it sold for around £1million. A couple of years later, the first fish in auction sold for a ‘mere’ $70,000. The prices can swing wildly, pending who turns up to chest-beat the most in a two-horse race of ostentatiousness. 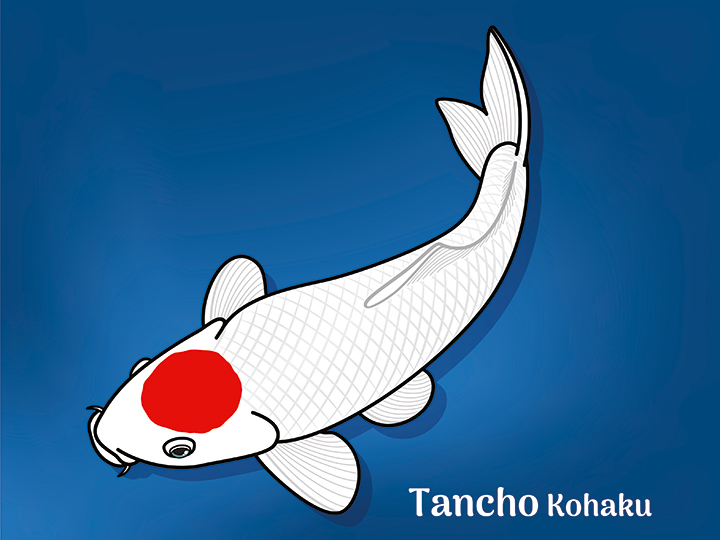 Closer to home, but paradoxically still in Japan, the second most expensive fish is one that fishkeepers will have a closer understanding of. In 2017, a Kohaku strain of Koi — Kohaku are white fish overlaid with red markings — auctioned to a Taiwanese bidder for a thrifty £1.4million.

Koi have long commanded high prices, and in the UK you’ll hear many a pond-owning blowhard lying about the values for their own fish. If someone is pointing at a Ghost koi and bragging about ‘worth tens of thousands of pounds’ then just conceal your sniggers and walk away. Trust me, it ain’t.

High-tier koi are the intellectual distillate of a long and arduous rearing process. A quality Japanese breeder may start with two or three million young fish in their ponds. Out of those, they’ll whittle down to something like 20,000 to raise for the first year. Of those, 1,000 or so will make it to the second year.

The breeder is looking primarily for colour, in its intensity and rendition. Most of the fish we see on sale are what might be classed as ‘low fidelity’. The markings are ‘soft focus’ and blurry. By contrast, high fidelity koi reared by a Japanese champion have clear borders to their markings. Only the snowiest whites, dead-of-night black and scarlet reds will do. Other factors, such as skin condition, how the fish swims — is it graceful or clumsy — all have a bearing on its eventual value.

The £1.4million koi carried an additional hallmark, something of high value to Japanese culture. Its red and white markings are highly symbolic in a country that prides itself on being the progenitor of ‘the rising sun’. It’s why the Japanese national flag is a solid red circle on a pure-white backdrop. It’s also why the Japanese have such an endearment for the Tancho strain of koi — a white fish with a solid red spot on the top of its head.

Another factor with koi is the reputation of the breeder. Much like fine wine, a good ‘estate’ with a strong reputation will be worth more than an unknown and potentially inconsistent one. The breeder of the above fish immediately gets a future advantage — and price hike — courtesy of his new fame as the breeder of the ‘best koi in the world’. Yeah, a lot of koi boys will pay for a name. 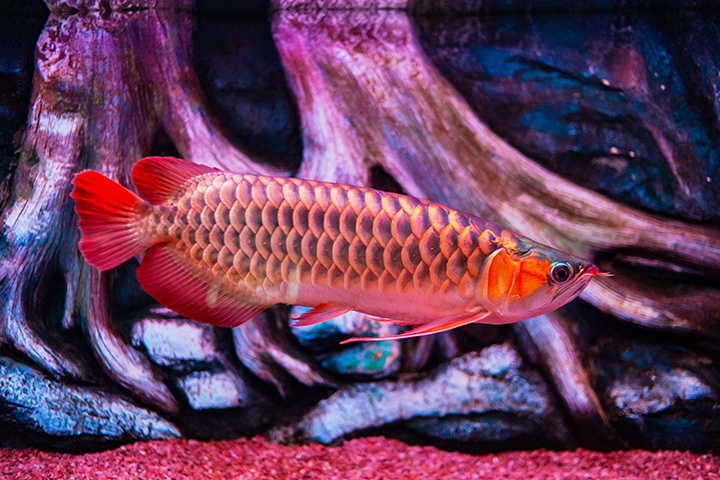 Asian arowana are prized in China.

There’s a considerable price drop to the third most expensive fish out there. A Platinum arowana sold around a decade or so back for around £250,000, though arowana have always come with a high price tag. £250k is a far cry from koi or tuna territory, but is still the equivalent of a comfortable detached house.

There are arowana and then there are arowana. In the UK, most of the silvery arowana you see on sale are the South American variety, Osteoglossum bicirrhosum. Not to cheapen them, but in arowana terms these are ten-a-penny fish, commercially turned out in pens across the Amazon and pumped out to an eager public.

No, the real money is in the Asian arowana, Scleropages formosus. This is a one of only eight fish species to make it on to CITES Appendix I, the highest degree of protection CITES can give to an endangered species. In some countries, they’re still illegal to import or own.

In theory, the endangered status alone of this fish should be enough to warrant a high price — rare things cost more. But the story is more confusing. While the wild fish are endangered, there’s a burgeoning industry in the farming of captive species, to the extent that there are more fish in tanks than native habitats. While availability is restricted, it isn’t that restricted. It is, however, controlled and regulated. It’s also hard to encroach upon.

Asian arowana in China, much like koi in Japanese culture, have monumental significance. In a nation steeped in feng shui and superstition, these fish are valuable dragon caricatures, able to bestow fortune upon their owners. They are revered by certain criminal gangs.

Add to that the genetic one-off that resulted in a perfectly platinum specimen, and you have all the necessary ingredients to bump that price up: the scarcity of the fish, the uniqueness of the strain, and a cultural fervour underpinning its celebrity.

New kids on the block

Over the last five years, a few things have changed. Returning to the marine hobby after a long hiatus? Try not to prolapse when you see the price of Yellow sailfin tangs now. Just starting the hobby as a Betta enthusiast? It’s possibly best you don’t remember the days that a dazzling male would cost you around £3.50, then.

The marine industry faces a unique dilemma. It is, for the best part, an arguably finite and wild resource. While commercially reared marine fish are available, they still generally cost more to produce than it costs to just yank them out of the sea. That’s partly why the trade for marine clownfish went the way it did. The profitability of standard clowns wasn’t great when trying to compete with wild caught ones, but then the blessing of anomalies arrived. Now we have designer clowns in a myriad of colours, commanding hundreds of pounds for a single pair.

Export bans have skyrocketed some prices. Yellow sailfins, once a staple of the Hawaiian export scene and a familiar face at around £30 in retailers suddenly shot to over £100 in some cases. Same fish, different economy. 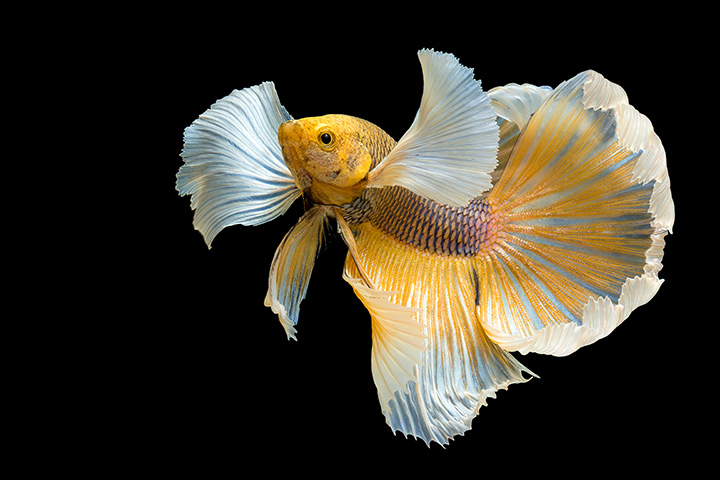 Along with the saltwater designer clowns, the two freshwater fishes with values that have long puzzled me are male Betta splendens and Flowerhorns.

In 2016, the most expensive Siamese fighter was purchased at an online auction out of Thailand for $1,500. This fish was, admittedly, unique; the livery it sported was a perfect replica of the Thai national flag. The fish was as anomalous as it gets, and even the breeder admitted that “the chance of getting one with the flag’s exact colour is like one in 100,000. Luck was really on my side.” It wouldn’t be hard to imagine a one-off fluke of a fish coloured like the Union Flag fetching an equally high price.

Nor are the fish hard to spawn. After livebearers, I’d likely put fighters in my top ten easiest fish to breed in the hobby.

Unlike koi, where there’s a vetting process that conforms to well-recognised standards, the ‘branding’ of many Betta appears to be a post-hoc affair. The fish are raised, looked at, and then a name applied to whatever feature they happen to bear — dumbo for overgrown pectoral fins, half-moon for a perfectly half-circular tail, and so on. New types and new names appear all the time, and with them, an additional cost to account for their novelty. 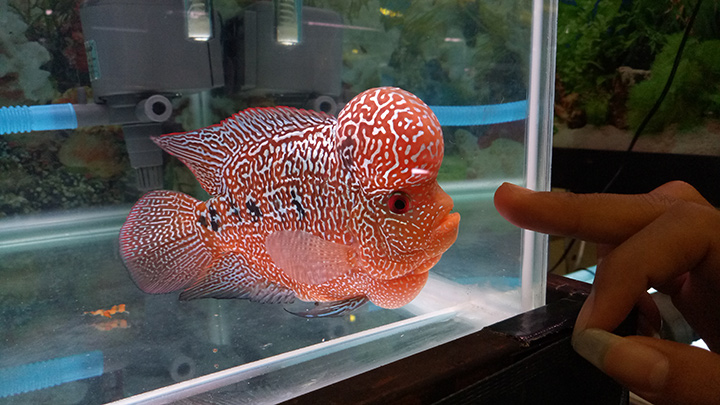 Give it a name, make up a price…

I see exactly the same thing happening with Flowerhorns. Get a parrot cichlid, hybridise it, hybridise that offspring again, and then invent a new name for it, call it a Flowerhorn strain and stick on a £200 additional price tag. By definition, the fish is rare if you’ve only just ‘created’ its hybrid form for the first time. It doesn’t wash with me.

There’s scarcity — the anomalous arowana, the ‘perfect’ koi — that commands a high price. But then there’s manufactured scarcity. And manufactured scarcity is what we see from the likes of De Beers, who stockpile all of the diamonds in the world, and then trickle them out in such a way as to keep prices inflated and extortionate. There’s a perceived value to these fish, that appears, prima facie, unearned.

But then again, I’m not the market. Ultimately a fish is worth what the customer will pay for it. In the democracy of the free market, we all vote for the products we like by paying for them. Is an infertile mix of four different cichlids worth £500? If someone buys it, then it clearly is.

Never had it so cheap

I don’t want to end on a grouch. While I have my reservations about the inflated value of some species, I’d do well to also consider that we have never had it so good for affordable fish. Some might argue that we’ve got it too good. Some fish — many fish — are so cheap that they are seen as disposable. It’s a lot easier to be aggrieved at losing a £200 catfish than it is a £1.50 Platy.

I’ve been running aquaria a long time (technically coming up to 40 years in January 2020), and have seen the majority of fish drop in value in real terms. I’ve seen some fish that pretty much haven’t shifted at all from their original asking price, while the rest of the world has become costlier. In the 80s I was paying just under £1 for a White Cloud Mountain Minnow. A brief scout around in 2019 will show I can still buy 10 of them for £9.99.

And given the enjoyment I can get from just a tank of 20 White Clouds — yeah, the majority of fish are VERY much worth the price.