Aquariums with a theme Nathan Hill checks out the workmanship and personalised theme direction being taken by an exciting new aquarium installation company in the UK.

At the other extreme, some simply turn up with an off-the-shelf package and set it up in the corner of a room — expecting recognition for doing something that any well-intentioned aquarist could undertake.

Aquafront finds new territory. Rather than being a dyed-in-the-wool aquarist turning to the alien world of interior design, founder Akil Gordon-Beckord surveys both avenues. His approach is low tech but high impact and the effect is striking in its simplicity. 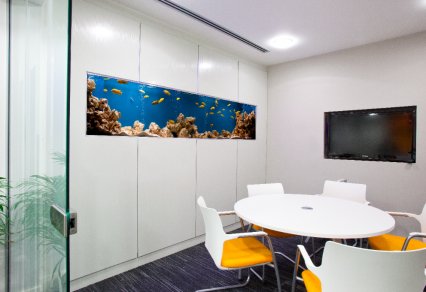 The installation we visited, which was the first of Akil’s commercial projects, is entitled Blue Lemon for reasons of customer personalisation. Akil’s speciality is to take a theme or word, something quite intimate to the client, and make that the basis of his project.

In the case of Blue Lemon, he was working with a company specialising in rescuing other companies. Its mission is to take organisations abandoned by all around them and revive and restore them.

This company's mantra is 'making the impossible possible' and it is this theme that Akil ran with in designing their aquarium.

Once familiar with the title, it’s clear how Akil approached the tank. The sharp, citrus yellows of the Aulonocara and Labidochromis species do indeed contrast softly, yet in a pronounced way, with the aquatic blue of the background. Strategic use of blue lighting and air stones further enhances the effect — creating both blue but equally lemon. 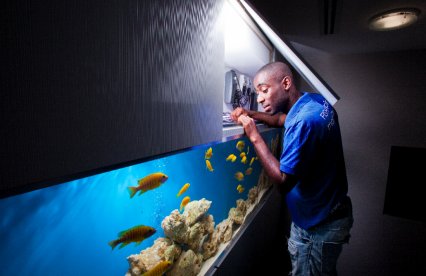 Although just 26, Akil has an extensive background in fishkeeping and is an avid hobbyist.

He has several ponds but his real enjoyment comes from aquaria. Currently he dabbles with Blue rams and Cardinal tetras in an aquarium of Amazon swords with a granite-gravel base.

Asked if a South American installation might be on the horizon, Akil reveals that a heavily planted 210cm/7’ Altum aquarium was in the pipeline, time permitting.

Having been a hobbyist for 18 years, he has played with most tanks. His first was a classic Hexafun from Hagen, like so many other aquarists. He is proud to recall that those first residents, two goldfish, are still doing well, having been rehomed to larger accommodation some time ago.

At 18 Akil was spending all his available money on aquaria, pouring all of his meagre income into a Rio 300 conversion.

Following in his mother’s footsteps, at the age of 21 he started to dabble in interior design. Her career is exclusively one of design and Akil felt he picked up lot of real world knowledge from her about how to make aquaria look good and fit in to home and office lifestyle.

Studying at Wolverhampton University, Akil graduated with his B.Sc. in animal biology with freshwater ecology. With a little academic knowledge, blended with real world fishkeeping experience, he then felt ready to embark on his own commercial ventures. 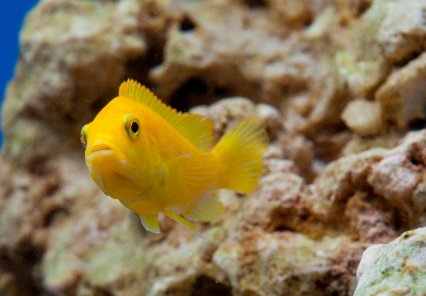 Akil managed the Blue Lemon project, but sub-contracted several tasks to others — such as the construction of the glass. Opting for a long window of an aquarium, he commissioned the building of a 2.55 x 0.35 x 0.45m/8.4 x 1.1 x 1.5’ all-glass aquarium, with a weir box at each end. The work was carried out by AC Aquatics of Newcastle, but installed by Akil and his team.

Akil also oversaw the redesign of the front fascia. Local professionals cut the wall to shape and installed access hatches above the tank. This tank is accessed from the front rather than the rear.

As for décor, Akil used 150kg of Ocean rock to bulk out the centre and sides. Combined with numerous sacks of fine playpit sand and 400 l/88 gal water capacity, the tank easily tips the half-ton mark. Aquascaping had to be considered carefully, due to the undermining efforts of the cichlids which might dig under a supporting wall and collapse the lot.

The hardware is incredibly simple. Filtration is a basic design, involving weirs filled with Alfagrog, foams, carbon bags and fine filter wool. The separate filters at either end are each driven by a Maxijet 1200. The weir boxes also house the two 300w heaters.

Oxygenation is increased by six air stones, driven by one Whisper air pump. Under each Akil has placed a single Arcadia LED light: four white and two blue in total. When the room lights are on these give the tank a subtle background, but when room lights are dimmed they are impressive. 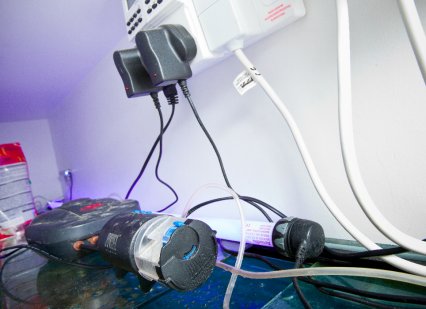 The main lighting of the tank is very basic. A couple of Arcadia T8 light tubes with standard ballasts sit atop the covers of the tank, giving brightness without glare. After all, the tank is neither particularly wide nor deep.

Remote controls mean the client can play with lighting from a distance and it’s all rigged to a timer so admirers need not fiddle with switches.

In fact, Akil ensures that several features are hands free. Feeding is via a timed device, periodically topped up by Akil. He performs weekly testing, along with water changes, filter cleaning and media changing when needed. He even takes into account eventual replacement of hardscape, as well as annually changing light tubes.

Future projects may include a remote device to detect water parameters and notify problems, but currently Akil is on 24-hour emergency callout. 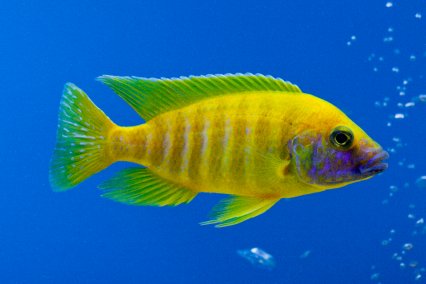 The fish selection here is simplistic and singular themed. Yellow Aulonocara and bright Labidochromis abound — with seven of the former and 20 of the latter.

Hostility seems non-existent and the fish are all happy with their respective territories. Since their addition at the start of this year, the Labidochromis have added to their numbers with breeding and fry can be seen lurking at the periphery among the safety of the rock precipices.

The fish are central to the design and one of the reasons that everything else in the tank — the light rocks and blue backing — is so unimposing.

Confusingly, there are also three Golden sucking loach to keep on top of algae that starts to form in Akil’s absence. Although not geographically correct, they seem happy with their lot and the cichlids pay them little to no attention. In all, the display is a tank full of very calm bullies.

These are still early days for Akil, but he already has big ideas. Inspired by the likes of Amano and Jeff Senske, he is keen to explore the planted aquascaping path.

He wants to try to change a common view of fishkeeping as just having fish in a box. He wants people to see aquaria as an intimate connection with nature, not something captured. He also wants more people to appreciate the artistic role of aquaria.

I would also like to see Akil realise the potential of his ‘home package’ art pieces. He wants to make available all-in-one package aquaria: rimless and complete with a pre-developed design, and a selection of suitable décor.

He sees mileage in people taking such tanks as part of a care package and the price would include plants, fish and period of maintenance during those first few tentative months. 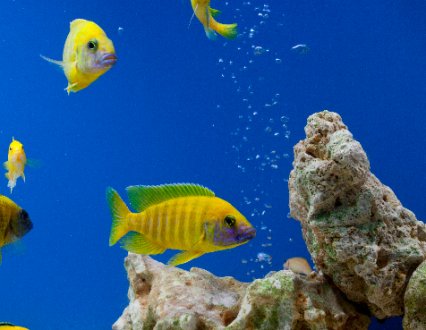 The two African cichlids in the tank are endemic to Lake Malawi. Aulonocara baenschi is easy to keep and part of the Peacock cichlid group, tending to be less rock dwelling than their mbuna cousins. These opt for open space and larger open water territories. 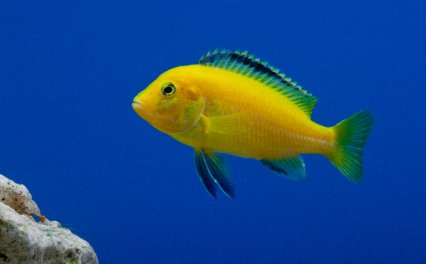 Labidochromis caeruleus are more commonly seen although often of poor quality. Exposed to less than perfect water conditions they can start to dull, developing blackened patches on the body, and taking on a ‘muddy’ hue. Kept well, they have a yellow that rivals marine tangs.

Reaching 8cm/3.1” adult length, these mbuna stay closer to their rock and cave networks and defend them with greater vigour.

Both species of fish are mouthbrooders, keeping their young in special ‘buccal’ pouches until able to fend for themselves.

Neither species would suit a standard community tank, requiring water of a high pH, tolerating ranges from 7.8 to 8.8 pH. This only makes them suitable to be kept with other Malawi-dwelling species.

The Sucking loach (Gyrinocheilus aymonieri) is an Asian fish with wide tolerances and a hardy reputation. When young they make good algae eaters, but can become aggressive when larger. Wild specimens can reach 25cm/10” or more, but aquarium inhabitants usually peak at around 15cm/6”.

Instant concept — just for me!

I put Akil on the spot to conceive a tank for me. Normally, he would use creative techniques to evaluate what would be best for a client and involve mood boards and multiple consultations before completing a proposal. However, being short on time, I rushed him into coming up with a quick concept!

We first had to find a word or theme and hang everything on that. Being a huge cigar fan, and considering them as something that defines who I am, I went with the words cigars and tobacco to see what he could come up with.

On the spur of the moment, Akil raced a few ideas my way. Working on the tobacco theme, he said I would need brown in my tank — a deep wood of some kind.

It would also need to be planted, but not garishly so. It would need an air of civility and order about it, but equally be unregimented and relaxing.

He soon visualised plans for a tank with a tangled wood theme, heavy with tobacco-like plants, especially Anubias species — only green ones. This was not to be a flowery scenario...

As for fish, it stood to reason that something cylindrical but equally refined would be the way forward. After quickly dismissing a few of his own suggestions, Akil settled on Nannostomus pencilfish.

I was impressed. Inside a few minutes, Akil had described my favourite tank at home: a green planted Fluval Flora with a tangle of driftwood and pencilfish — just pencilfish.