A trip to the Zoa Once viewed as cheap fillers, zoanthids have become a cult collectible in their own right. New contributor Felicia McCaulley takes us on a tour.

Zoanthids, commonly called ‘button polyps’ or simply ‘zoas’ are some of the most popular reef aquarium corals in history. Not only are they generally hardy and easy to keep even for beginners with newer aquariums, but they come in a staggeringly spectacular variety of colours and colour combinations with over 300 distinct varieties listed on Zoabrary, a popular zoanthid website. It could be argued that this is the most visually variable order of beginner corals in the hobby.

Each button polyp consists of a small mouth in the centre of an oral disc surrounded by tentacles and on a fleshy stalk. They are colonial, forming interconnected mats or colonies of polyps connected by thin bands of tissue. Some species are colonial but form unconnected polyps on a pedal disc, or foot, connected to the substrate.

Zoanthids in the aquarium hobby range in size from just a few millimetres to around 3cm in diameter. In nature most zoanthids are tan, green, or brown, but some are brightly coloured and extraordinary specimens can display five or more distinct colours. At night or when disturbed, zoanthids fold their tentacles inside the polyp’s grey coloured fleshy stalk. Most of the popular species in the aquarium trade grow on stalks connected by a stolon, or runner, or grow as individual polyps, but some grow as polyps on a thick mat called the coenenchyme. 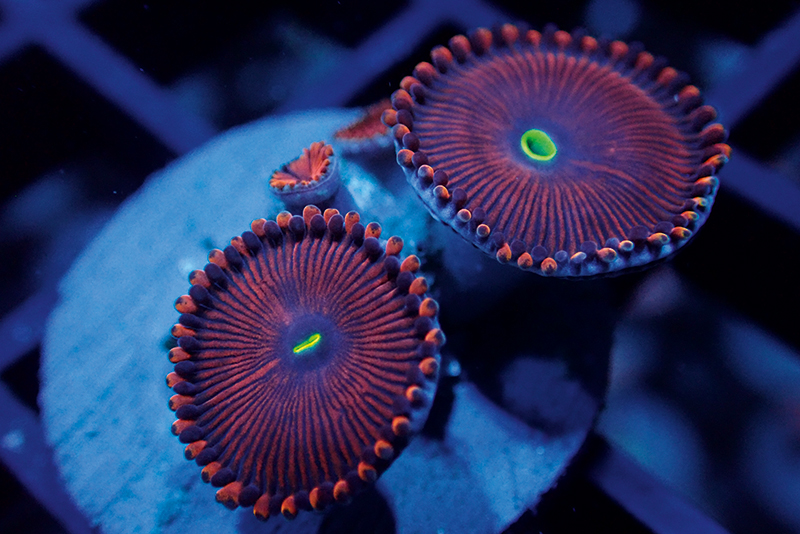 What’s in a name?

There are fourteen different species of Zoanthus and dozens of species of Palythoa, but aquarium hobbyists generally don’t identify zoanthids by species or even genus. Each species can vary wildly in colouration, and the species isn’t as commercially important as the colour. Instead, hobbyists focus on the colour strain or trade name. There are no hard fast rules for naming zoanthids in the hobby, but there are some trends that most vendors follow.

Each colourful strain usually is named by the first vendor or aquaculturist to produce or popularize the strain. Having the vendor’s name in front of the strain name indicates that the frag has a pedigree going all the way back to the original piece popularised and named by that vendor. Colonies that are maricultured or collected from the wild that share a similar colour and pattern as a named strain may be marketed as ‘similar morph’ or ‘identical morph’ after the name, so buyers know this item doesn’t have a pedigree going back to the original named colony. Sometimes new vendors will acquire broodstock colonies that are identical to the first named strain, and they will add their company name to the strain name of their aquacultured version. If a strain is particularly brightly coloured but too similar to an existing strain to warrant a new name, it may have ‘ultra,’ ‘electric,’ or a similar modifier in front of the name.

Though both Palythoa and Zoanthus polyps tend to vary in size, Palythoa are generally the larger of the two. Hobbyists and commercial aquaculturists find it difficult to convey polyp size in photographs, so they label most larger size polyps as ‘Palythoa’ in the common name and smaller polyp varieties as ‘Zoanthus.’ This helps give online shoppers an idea of how large each individual polyp might be. There are technical differences between true Palythoa and Zoanthus, but for the purposes of aquarium hobbyists, identifying these corals by scientific name isn’t as important as identifying them by the trade name.

To identify different named varieties of zoanthids, take into consideration the colouration, size, and shape of the polyps and its parts. The oral disc may be solid, patterned, or multicoloured with rings. Some have striations, speckles, or intricate patterns. The mouth may be a different colour than the oral disc. The skirt can be solid coloured or multicoloured, rarely speckled with random splotches of colour. Colours can range from dull brown/tan to every colour in the rainbow. Some colours are so bright they appear to be glowing. Many have fluorescent proteins which glow under actinic lighting. The tentacles may be blunt, rounded, long, and/or pointed. The mouth can be round and small, or may be a longer linear slit. Those with the long mouth are commonly called ‘people eater’ zoas. 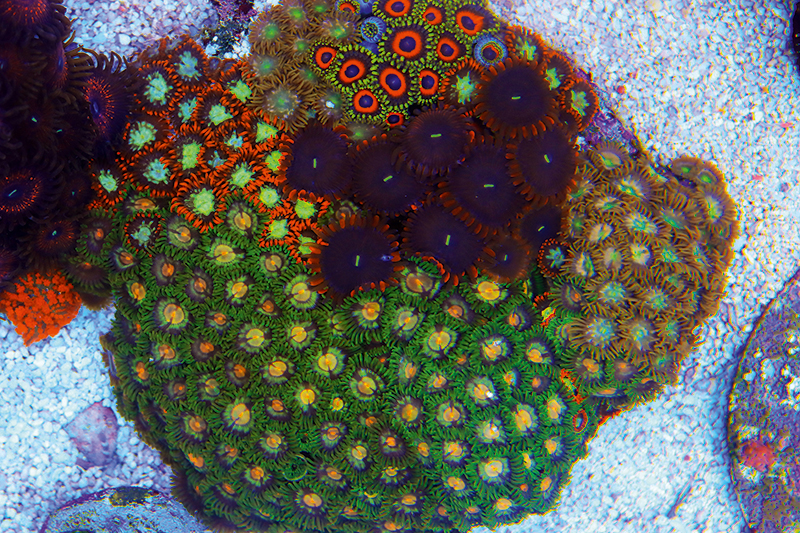 Zoa colonies are often sold as mixed ‘gardens’ of polyps.

Zoanthus are forgiving of a wide range of water parameters. Although they don’t build skeletons from calcium carbonate, they naturally do best in stable natural sea water parameters. Like many other soft corals, they need a detectable level of nitrate and phosphate in the water and won’t thrive in ultra low nutrient systems. They’re quite tolerant of high nitrate levels in aquariums, however very high nitrate levels can cause them to decline and also favours the growth of nuisance algae which can suffocate and kill them.

They are able to grow in low lighting but will be more brightly coloured under brighter lighting. It’s of course important to acclimate them to your lighting gradually by lowering the intensity of the light and slowly increasing the intensity or starting the coral at the lower levels of the tank and then slowly raising it to the desired location. If you notice the stalks are unusually long and the polyps appear to be reaching for the light, raise the coral or increase the light intensity. If you see they are becoming pale, white, or ‘bleached out,’ lower the light intensity or place them in a shadier spot and feed well until recovered.