This month we’ve teamed up with the fish food pioneers at FishScience to offer 15 bottom dweller bundles!

Fish food specialists FishScience are offering FIFTEEN readers a chance to win a bundle of their award-winning foods for bottom feeding fish in this month’s competition.

The foods included in the prize:

FishScience Corydoras Tablets (150g, RSP £10.45) are rich in insect meal, which is what these fish eat in the wild. They break down slowly in the water and quickly result in a ball of feeding fish.

Great FishScience Oak and Algae Wafers (120g, RSP £7.95) are a new addition. The robust 17mm wafers are aimed at wood grazing species such as Panaque and Peckoltia. The wafers contain oak bark, a special ingredient to provide roughage and other nutrients for these species and all other algae grazing fish.

FishScience Worm Pellets (125g, RSP £8.45) are semi soft 1mm sinking pellets for loaches, Corydoras, South American cichlids and many other fish species. The food contains over 40% worms including earthworm, bloodworm, mealworm and silkworm. Even timid eaters such as knife fish and fire eels are tempted by the high worm content of this food!

This competition closes on Friday July 17, 2020, and is for UK residents only. Good luck!

This competition is now closed. 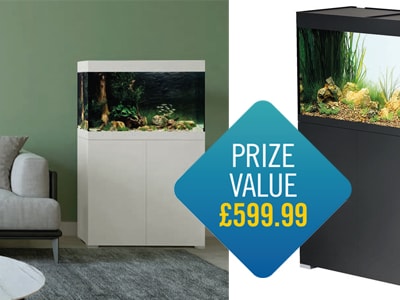 Win an all new OASE StyleLine 175 tank and cabinet set-up!

This month, we’ve teamed up with world-renowned manufacturers OASE to offer one lucky reader the chance to win an OASE…
Return to List